In a study which analyses the effect of Lithium on suicide rates, the results were the following:

My first approach would be to apply the Chi Square test, which does not result in a significant difference (chi=3.0184).

The authors however, suggest the following, finding a significant difference between the groups (p=0.049):

As a post hoc analysis, differences between intervention groups with regard to completed suicides were examined based on determining the probability of zero events in the lithium group on the expectation of 3 ⁄ 83 events in the placebo group on grounds of a Poisson distribution

Is this a valid approach, what am I missing?

Indeed, the fractions of suicide $\frac{3}{83}$ and $\frac{0}{84}$ are different. That is correct. But for a good research report, we also want to express how much this observation may have been due to chance.

There are all sorts of ways to compare these numbers. To get these differences intuitively. Maybe it is more intuitive/straightforward to do some modeling/computing...

Probability of getting 0 cases

Let's consider the probability to get 0 cases out of 84 patients when the assumed suicide probability is $p$.

The curve below shows how this probability depends on $p$ 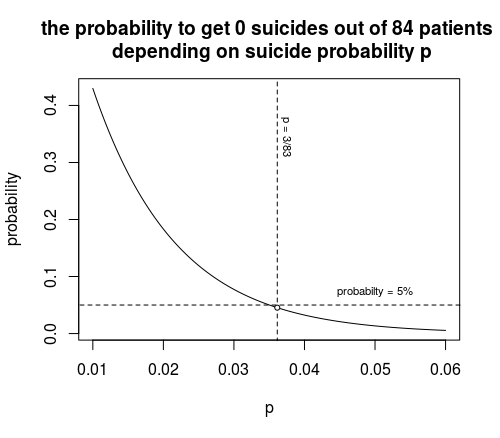 You would assume that the null hypothesis is that the probability of suicide in both groups is the same: $p = p_1 = p_2$. The true suicide probability $p$ is unknown and this is what makes the analysis difficult.

In the study, the authors use one group as the reference and see whether, based on that one group, the other group is significantly different. But is that really significant?

Let's try it out with a simulation of how often we would infer that the bigger group is significantly larger than the smaller group.

the simulation shows clearly that with this approach you do not really get a true p-value. Given the hypothesis $p = p_1 = p_2$ the probability to reject this hypothesis is not constant and equal to the p-value. What the researchers compute is a p-value based on the assumption that the result from the other group is correct. But this is not the probability that they find a discrepancy. 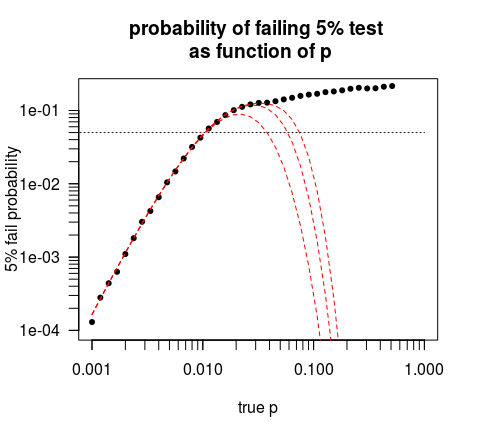 The reason why the second part in the graph is much higher than 5% is in part because the the situation is two sided. If the two groups are in reality equal then you get half the time the one group larger and the other time the other group larger. This increases the probability to find a significant difference by two. The other part of the reason is because the test performed (how does one group compare to the other) is not reflecting the hypothesis test (the two groups are the same). The computation of the p-value assumes that the one group is the reference but it does not take into account that the difference between the two groups may be due to the one group being occasionally higher while the is occasionally lower.

Sample distribution of results and $\chi^2$

You can see that for a given $p$ the distribution has some sort of spherical distribution. Getting further away from the line 'group1 = group2' is less likely. This is what the $\chi^2$ test measures. It looks how far we get from the line 'group1 = group2' and determines whether this is unlikely or not (we do not know what the true $p$ is and so we can not determine the p-value exactly, but we can use the estimated $p$ to determine this, or use the highest p-value out of all possible parameters $p$). The $\chi^2$ test does this by approximvting the distribution by a normal distribution.

In the same plot I have plotted the rejection boundaries that relate to the article that you referenced. These types, of boundaries are not accurate because they only consider one of the two groups as variable and the other group is considered as the reference. This underestimates the variability in the difference between the two groups. 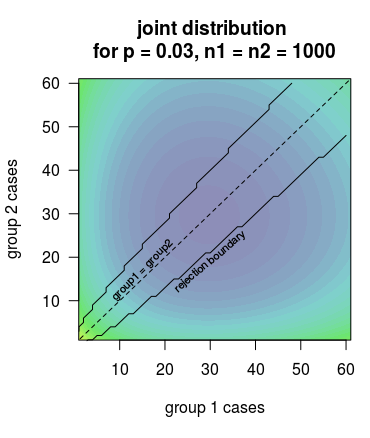 The group sizes and the number of cases are too small to make reliable estimates.

The estimate they make is interresting but also slighlty optimistic. The above computations show how it is not a realistic p-value.

But, in addition, what we have not discusses above, the issue goes beyond the mathematics. The distribution of the test results is not a clean and nice binomial distribution (which is approximately Poisson distributed) and independent. The results might be biased which happens for instance when the experiment is not randomized or when the treatments are not blind. The test results migh be correlated, due to test procedures that are repeated within multiple subjects and not completely randomized. In this case the distributional assumptions are wrong (e.g. instead of i.i.d binomial distributed cases it might be including a random effect, or one might need to use a beta-binomial distribution instead).

Yes - the Poisson distr. measures "arrivals", meaning the count of a variable occurring over a given interval. The recurrence of suicide is the event in this study. The "hazard ratio" refers to the rate of arrival, or the lambda parameter of the Poisson distribution.

Rather than just measuring group deviance from mean, as a chi-sq distr. would, modelling the data as Poisson directly measures the cross-group suicide recurrence rate itself.

Not the answer you're looking for? Browse other questions tagged statistical-significance chi-squared-test poisson-distribution clinical-trials medicine or ask your own question.

3
How to determine statistical validity of results
5
How to extract data from published articles (RCTs) to do a meta-analysis?
3
Post hoc chi-square test
4
The correct use of 'statistical significance'
5
How to correctly calculate the type I error in a two-step clinical trial when stopping after the first step?
3
compute sample size for chi squared test validation
0
Gender and Medical Condition - Is a Chi-Square Test of Independence the Correct Test to Use?
10
Should AstraZeneca's results be discounted?
0
Question on the chi-square test and Poisson distribution for significance testing