I am conducting a topic modeling study via Latent Dirichlet Allocation (LDA) on scientifc abstracts over a range of about 20 years (in R). One of the outputs of LDA is a document-topic-distribution matrix, columns represent topics, rows show the probability of each topic per document. Each entry in a row may be a value between 0 and 1, while the probabilities sum up to 1 in each row. Using the information on the publication date of the documents might be used to derive timely trends of individual topics. Others, e.g., Griffiths and Steyvers (2004), have simply used the mean of the topic probabilities per year to derive a trend. It should be clear that the expected probability values per topic per year are very small values, since several of the entries for an individual topic and a given year are close to zero.

My question now is: How might a Generalized Additive Model (GAM) best be used to create a smoothed trend (rather for "simple" visualization of trends than for prediction)?

Using a GAM instead of mean values makes sense from my understanding (please correct me if I am wrong), since usually the number of documents available increases with time, so that there are many more data points in recent than in past years - using mean values to build trends somehow discards this information and the steps such as minimizing erros, etc.

For an LDA model with 300 topics for 26533 documents I have fitted GAMs for each topic and I am not sure how to deal with the quality of the results. Maybe someone can support me in improving my understanding. I am relatively new to GAMs so please excuse if I have forgotten to report anything, etc. or maybe have even made wrong choices for the model (just started to read and trying to understand S. Wood's book on GAMs with R).

In the following a model summary for one selected topic. The resulting explained deviance is very low, however, the GCV is very low and the coefficients seem to be significant (see model summary below). This seems a bit contradictory, but probably I have not fully understood the values, yet.

I would appreciate any hints, explanations, criticism.

UPDATE: In response to the answer of @Gavin Simpson I have fitted a gam with family = betar and provided some more details on the data. I have further included a link to the data of the topic used for the models in below code.

I think I have not fully understood how the different models are related regarding prediction of the response. The betar based models appear as a straight line at the scale of the predictions of the other gaussian based models. However, when plotting the former models at their "own" scale, the course of the curve makes sense, especially considering the number of documents per year, making data before 2005 less relevant during fitting (at least, this is my understanding). I am more lost than before knowing about the use of the beta distribution...

Regarding Dirichlet Regression I am still trying to work my way through and might provide an additional update. 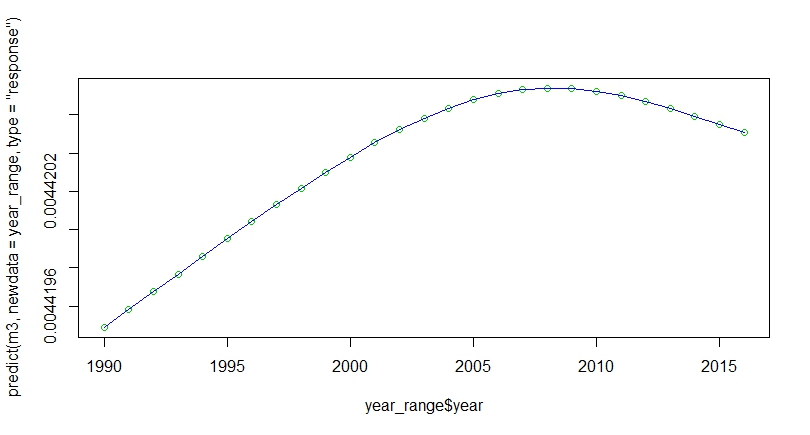 You are modelling a proportion and you need to fit a model that accounts for the bounded nature of the data.

if you repeat this for all topics, you'll find that the estimated/predicted mean proportions don't add up to 1. For that you'd need to fit a Dirichlet regression, which as far as I can tell can't be fitted via functions in a package available for R whilst retaining the nice features of mgcv to do smoothness selection.

I have used the DirichletReg package to fit the model with bs() or ns() terms from splines package to get smooth trends, but you need to specify the complexity of each smooth.

Not the answer you're looking for? Browse other questions tagged r generalized-additive-model mgcv latent-dirichlet-alloc or ask your own question.