What exactly is a seed in a random number generator?

I tried some usual google search etc. but most of the answers I find are either somewhat ambiguous or language/library specific such as Python or C++ stdlib.h etc. I am looking for a language agnostic, mathematical answer, not the specifics of a library.

As an example, many say that the seed is a starting point of random number generator and the same seed always produces the same random number. What does it mean? Does it mean the output number is a deterministic function of a specific seed, and the randomness comes from the value of the seed? But if that is the case, then by supplying the seed, are not we, the programmers, creating the randomness instead of letting the machine do it?

Also, what does a starting point mean in this context? Is this a non-rigorous way of saying an element $x\in\mathfrak{X}$ of the domain of a map $f:\mathfrak{X}\rightarrow\mathfrak{Y}$? Or am I getting something wrong?

Most pseudo-random number generators (PRNGs) are build on algorithms involving some kind of recursive method starting from a base value that is determined by an input called the "seed". The default PRNG in most statistical software (R, Python, Stata, etc.) is the Mersenne Twister algorithm MT19937, which is set out in Matsumoto and Nishimura (1998). This is a complicated algorithm, so it would be best to read the paper on it if you want to know how it works in detail. In this particular algorithm, there is a recurrence relation of degree $n$, and your input seed is an initial set of vectors $\mathbf{x}_0, \mathbf{x}_1, ..., \mathbf{x}_{n-1}$. The algorithm uses a linear recurrence relation that generates:

Now, it is important to note that this is just one example, using the MT19937 algorithm. There are many PRNGs that can be used in statistical software, and they each involve different recursive methods, and so the seed means a different thing (in technical terms) in each of them. You can find a library of PRNGs for R in this documentation, which lists the available algorithms and the papers that describe these algorithms.

The purpose of the seed is to allow the user to "lock" the pseudo-random number generator, to allow replicable analysis. Some analysts like to set the seed using a true random-number generator (TRNG) which uses hardware inputs to generate an initial seed number, and then report this as a locked number. If the seed is set and reported by the original user then an auditor can repeat the analysis and obtain the same sequence of pseudo-random numbers as the original user. If the seed is not set then the algorithm will usually use some kind of default seed (e.g., from the system clock), and it will generally not be possible to replicate the randomisation.

First, there is no true randomness in today's computer-generated "random numbers." All pseudorandom generators use deterministic methods. (Possibly, quantum computers will change that.)

The difficult task is to contrive algorithms that produce output that cannot meaningfully be distinguished from data coming from a truly random source.

You are right that setting a seed starts you at a particular known starting point in a long list of pseudorandom numbers. For the generators implemented in R, Python, and so on, the list is hugely long. Long enough that not even the largest feasible simulation project will exceed the 'period' of the generator so that values begin to re-cycle.

In many ordinary applications, people do not set a seed. Then an unpredictable seed is picked automatically (for example, from the microseconds on the operating system clock). Pseudorandom generators in general use have been subjected to batteries of tests, largely consisting of problems that have proved to be difficult to simulate with earlier unsatisfactory generators.

Usually, the output of a generator consists of values that are not, for practical purposes, distinguishable from numbers chosen truly at random form the uniform distribution on $(0,1).$ Then those pseudorandom numbers are manipulated to match what one would get sampling at random from other distributions such as binomial, Poisson, normal, exponential, etc.

One test of a generator is to see if its successive pairs in 'observations' simulated as $\mathsf{Unif}(0,1)$ actually look like they are filling the unit square at random. (Done twice below.) The slightly marbled look is a result of inherent variability. It would be very suspicious to get a plot that looked perfectly uniformly grey. [At some resolutions, there may be a regular moire pattern; please change the magnification up or down to get rid of that bogus effect if it occurs.] 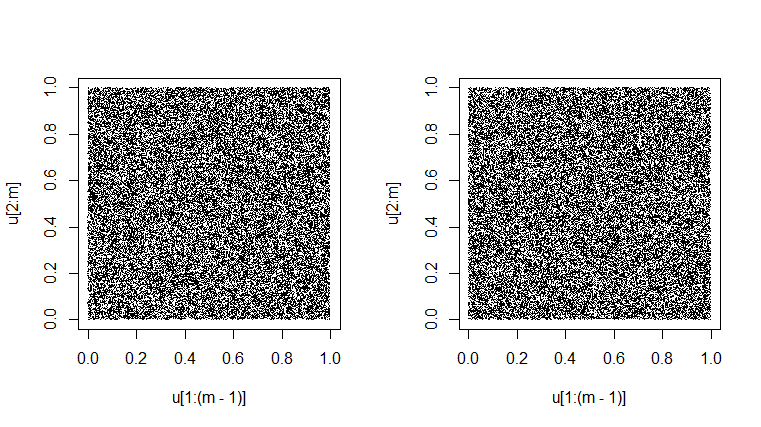 It is sometimes useful to set a seed. Some such uses are as follows:

If I set a seed at the start, the simulation will get the same result every time. Students can proofread their copy of my program to make sure it gives the intended results. Then they can run their own simulations, either with their own seeds or by letting the program pick its own starting place.

A seed usually enables you to reproduce the sequence of random numbers. In that sense they are not true random numbers but "pseudo random numbers", hence a PNR Generator (PNRG). These are a real help in real life!

Virtually all "random" number generators implemented in computer languages are pseudo random number generators. This is because given a starting value (===> the seed) they will always provide the same sequence of pseudo random results. A good generator will produce a sequence that can not be distinguished - in statistical terms - from a true random sequence (throw a true die, true coin, etc).

In many simulation cases you want to have a true "random" experience. However, you also want to be able to reproduce your results. Why? Well, at least regulators are interested in that peculiar thing.

There's a lot to dive in to. People even do analysis into the "best" random seed. In my opinion this invalidates their model as they can't handle "true" random behavior - or their PRNG is not fit for their implementation. Most of the time they just don't do enough simulations - but they take time.

Now imagine a "true" RNG. One could implement this based on a kind of randomness in the machine. If you only take a random seed (e.g. time now) you create kind of a random starting point but the randomness of the sequence still depends on the algorithm to determine the next numbers. This is more important than the starting point in most cases as the distribution of results determines the actual "result". If your sequence should be truly random, how would you implement this? Clock ticks of a computer can be said to be deterministic and otherwise probably will show a lot of auto-correlation. So what can you do? The best bet so-far is to implement a solid PNRG.

Quantum Computing? I'm not sure that will fix it.

42
Random number-Set.seed(N) in R
2
Is this a valid way to get a simple random sample?
1
Random Forest in R [set.seed()/parameters/confusion matrix]