The projected transformations will often converge very quickly (based on convergence diagnostics such as the Gelman/Rubin or by eyeballing the posterior samples) even if the latent variables have not yet converged.

So is the intuition correct that I shouldn't be concerned that the overparameterized latent variables are not identifiable and aren't fully converged when I take my posterior samples? Are there some good references which discuss the use of non-identified latent variables in this way? I've heard some discussion on overparameterizing to speed up mcmc convergence, but I'm not entirely clear on how to think about this, as the approaches and attitudes towards overparameterization and non-identifiability in bayesian methods seems to be a bit different than in other areas of modeling.

So is the intuition correct that I shouldn't be concerned that the overparameterized latent variables are not identifiable and aren't fully converged when I take my posterior samples?

I think your intuition is correct: you shouldn't be concerned that the overparameterized latent variables are not identifiable and aren't fully converged. In fact, the latent variables likely can't converge; my understanding is that in this situation the full state space chain is null recurrent, even though by your account there is a transformed state space of smaller dimension in which the chain is full recurrent (and hence has a stationary distribution). For what it's worth, I have deliberately created and used such MCMC chains myself in my applied research.

Sometimes stochastic processes with these features are used to model time series data (key word: cointegration). A quick look at this plot might generate some intuition: 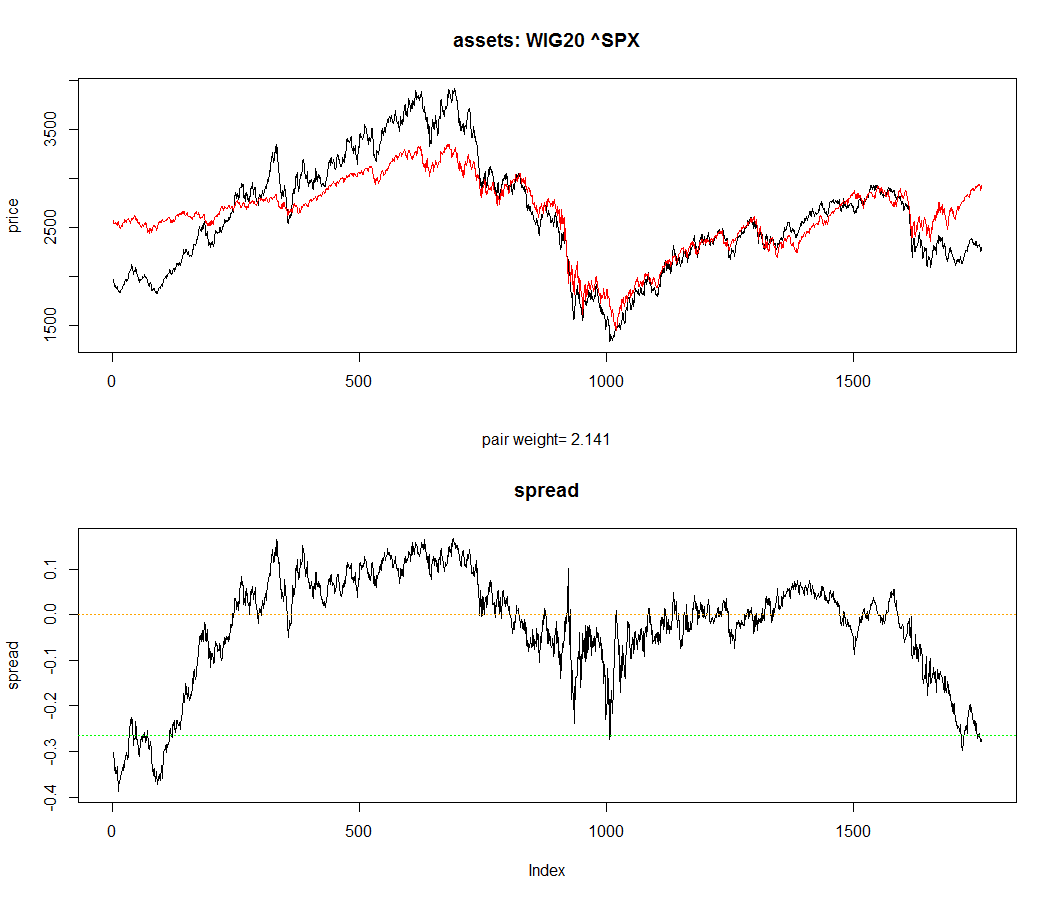 The upper figure shows two price time series, which one might think of as nonstationary in due to inflation even though no inflation can be seen on the time scale of the plot. Although each time series taken alone is nonstationary, there can exist a smaller dimensional manifold within the full state space (in this case, the "spread", i.e., the difference of the time series) such that the stochastic process generated by projecting the original process onto the manifold is stationary.

Are there some good references which discuss the use of non-identified latent variables in this way?

I don't know of any references that discuss the use of non-identified latent variables in this exact way, but here are a technical report and a published paper on the subject by Andrew Gelman, and here is a more recent manuscript by a different author that I think might be closer to what you're doing than the previous two references.

Not the answer you're looking for? Browse other questions tagged bayesian multilevel-analysis markov-chain-montecarlo latent-variable convergence or ask your own question.

3
When 2% of the Bayesian Model have not converged?

11
Identifiability of a state space model (Dynamic Linear Model)
0
Bayesian approach and ML approach for distributions
12
When does asymptotic normality of the Bayesian posterior (Bernstein-von Mises) fail?
2
Estimating the contribution of covariates in a boral latent variable model
3
Are analytically tractable posterior distributions exclusively the result of a conjugate relationship in Bayesian hierarchical models?