Looking to see if random sample is uniform or not

I've been tracking data and I am looking to see if it is truly uniformly random. The scenario is there can be a grid of 35 colour tiles with 5 different colours (Blue, Green, Purple, Red and Yellow). So in theory over time you should see an average of 7 tiles per each colour. I have collected a sample size of 112 grids and here is the average of each colour:

Is the sample size large enough? I'm curious to why purple is coming up so low but need to know if statistically if it is random or not?

You have seen 112*35 = 3920 colors. The expected frequency of each color is then 784. You can use a Chi-square test to see if the colors are randomly distributed in your sample.

This means that if the colors were randomly distributed then then the probability of us receiving a Chi-Square statistic as large or larger than the one we did would be 53.42%

Just to add, in terms of sample size, your sample is plenty big enough. A rule of thumb that I have read is that the expected frequency should not be less than 5, which clearly at 784 we are larger than.

In addition to the chi-squared test as described in @astel's answer, you could also do this by simulation.

I did this in R and here's the result: 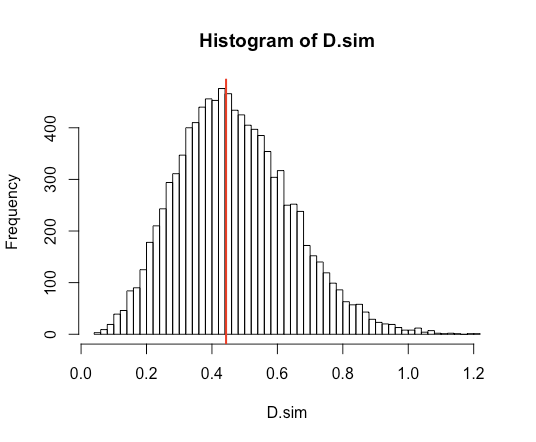 Here's the code to do this:

There are tons of other things you could do here, like consider different norms, look at each coordinate by itself, or try more analytical methods such as the chi-squared test suggested in @astel's answer. But I like simulation because it's nice and simple, and I find it easier to do simulation-based approaches when I'm trying to reason about a problem that I don't know how to solve in advance.

As for your concern about sample size, you need to be more clear about what you want to detect. If you say that you want to detect any difference, then there is a sample size sufficient to do that with high probability but it could be astronomical. Suppose in truth the probability of a purple square is not $0.2$ as it would be under $H_0$ but instead is $0.1999999$. As $n\to\infty$ you will eventually reject with high probability but the required sample size is going to be enormous.

The point of this is to say that when you ask "is the sample size big enough", the only real answer is "for what?". 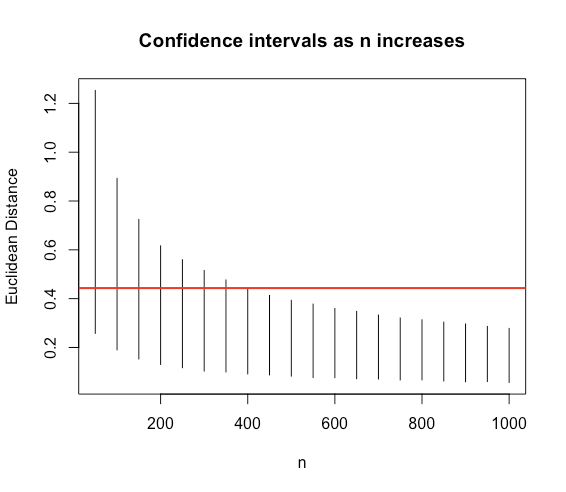 Again, the red line is your observed value.

So for the particular $t$ you observed, even though with $n=112$ we saw no evidence of there being a meaningful deviation, we'd start rejecting this once $n \approx 400$. But the point of this is that that's not the right way to look at this. If this is a real situation you know the probabilities aren't EXACTLY $(1/5,\dots,1/5)$. Instead, you want to make sure you reject when the difference is big enough to matter, which requires using domain knowledge to decide what "big enough to matter" means here.

Here's the code for that plot:

Not the answer you're looking for? Browse other questions tagged hypothesis-testing multinomial-distribution random-generation or ask your own question.