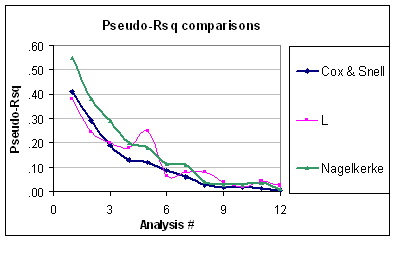 I would agree in general that just using R2 is not good. But also see that point of @rolando2 comments that focusing on classification metrics could be not enough while comparing the models.

I guess my contribution to the discussion is that I think that several measures are to be reported to assess different model qualities.

For example, one may not only want to know what happens at the optimum threshold which separates cases from non-cases and respective error rates (false positives etc and integrated measure of this which is c-statistic), but also how good model output in terms of probabilities of being a case or non-case is close to reality (or corresponds to the actual rate of cases in the pool of observations with given parameters) across ALL ranges of output. I.e. that if it says an observation is 20% likely to have output of 1, that around 20% of observations with similar risk factors are cases. This is what referred to as calibration quality as opposed to discrimination (e.g. in Steyerberg et al Assessing the performance of prediction models: a framework for traditional and novel measures.) And this is exactly what calibration plot visually assesses, while Hosmer & Lemeshow quantified it in their goodness-of-fit statistics. The critics of H-L is that it depends on how you group observations, and playing with it I see that the value can change quite a bit on different data. Calibration slopes and intercept may be good alternative if one also does cross-validation or evaluates the model on a hold-out data as in predictive modelling. Finally, some kind of R2, preferably Brier score or scaled Brier score, can be used to assess the overall fit. This measure is the same as R2 for linear regression, where error is defined as diff in probability and binary output, but also takes into account known variance of the binary output and normalises by q*(1-q). Also, for a narrower discussion on checking of adding a new predictor makes a better model, IDI - integrated discrimination improvement, which is similar to the difference in scaled Brier scores, could be a very good addition to, say, the change in c-statistics or how good reclassification was - as it checks how re-classification got better across all thresholds. (Pencina MJ, D’Agostino RB, D’Agostino RB, Vasan RS. Evaluating the added predictive ability of a new marker: from area under the ROC curve to reclassification and beyond)

Instead of the Nagelkerke way of scaling $R^2$ to allow a 1.0 to be attained, I prefer to substitute the effective sample size for $N$ in the $R^2$ formula. This will not reach 1.0 for perfect binary predictions but this approach translates to other settings such as survival analysis where often the effective $N$ is the number of events, and to ordinal regression. See https://hbiostat.org/bib/r2.html.

Of those my favorite is the modified Maddala-Cox-Snell $R^{2}_{m,p}$ which uses effective sample size $m$ and penalizes for $p$ covariates. In the normal linear model this is almost exactly the traditional $R^{2}_{\mathrm{adj}}$.