How to determine the cut off value of an hyperellipsoid in order to retrieve a single quantile of a multivariate normal distribution?

I aim to retrieve the $\text{VaR}_\alpha$ for $\alpha \in \{0.1, 0.05, 0.01\}$ in the context of a portfolio comprising $d>3$ financial log returns where we assume that the portfolio log return follows a multivariate normal distribution, i.e. N(0, w^T H w). We define w as an equally weighted vector of length $d$ meaning that each asset is equally represented in our portfolio. In this context VaR is the maximum loss with 1-$\alpha$ probability. Given the definition of VaR, VaR is expected to increase with a decrease in the $\alpha$. The idea is to use VaR estimates in a backtesting analysis in order to evaluate different models used for forecasting the covariance matrix H.

In case of unimodal symmetric distributions such as the multivariate normal distribution considered in the question, quantiles correspond to Highest Density Regions. As pointed out here, the highest density region of an N(0,H) random variable is an ellipsoid centered at its mean, 0, and oriented per the covariance matrix H:

In order to find a single quantile that satisfies the definition of Value-at-Risk we proceed as follows: the set of solutions that satisfy the condition of the ellipsoid equation, the level set, is retrieved by randomly generating many points on this ellipsoid. Then, I evaluate the portfolio return at each solution satisfying the condition: for example, let's suppose $s = (x_1, x_2, \dots, x_d)$ is a solution/ point on the ellipsoid, then the portfolio return at this point will be $w\cdot s$, which corresponds to the mean of the solution vector because we stated that each asset is equally represented in the portfolio and $x_i \in s$ corresponds to the return of asset $i$. Consequently, the lowest return, the minimum, on the ellipsoid is the maximum loss.

Any comments that could point me in the right direction are more than welcome.

Python code for obtaining random points on the ellipsoid

What you should use is

If $R=w^T x$ is your loss/return, then this means that you are looking for the distribution of a variable that is the linear combination of the components of the multivariate normal distributed variable

Now you can just look for the percentiles of this univariate normal distribution.

Why and how you get a difference:

These two will cover two entirely different regions, or at least shapes (your loss isosurfaces are defined by $w^T x=c$, which are hyperplanes).

Thus your Mahalanobis ellipsoids should contain some points outside the region of the 95% samples with optimized loss. Therefore the calculated value in this way is lower than the VaR. Because inside the 95% ellipsoids you include some of 5% point beyond the 5% hyperplane with lowest cost.

Below is an image that demonstrates the principle (in two dimensions but the principle remains the same for more dimensions). Thousand datapoints are simulated and drawn for $H=\begin{bmatrix} 4 & 1 \\ 1 & 2 \end{bmatrix}$. The colours depict varying return which is calculated as $w \cdot x$, and with equal weights this is $x_1+x_2$.

You see that the the boundary around the 95% points with highest density, is something different than the boundary for the 95% with the highest return (or lowest loss). 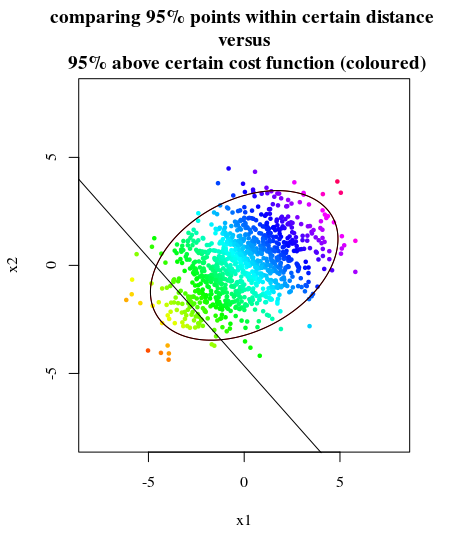 If you're just after VaR, one way to calculate VaR is the "Delta Normal" method.

Not the answer you're looking for? Browse other questions tagged estimation multivariate-analysis quantiles multivariate-normal-distribution highest-density-region or ask your own question.

2
How do I use student's-t distribution without the sample size?
29
How to determine quantiles (isolines?) of a multivariate normal distribution
1
Multivariate GARCH with respect to Value at Risk
3
How to find the maximum axis of ellipsoid given the covariance matrix?
3
Help with intuition about Chi-Squared distribution and its relation to Normal Distribution
0
Definitions of VaR (Value at Risk)
1
Can Value at Risk and Expected Shortfall be equal?