Two random variables A and B are statistically independent. That means that in the DAG of the process: $(A {\perp\!\!\!\perp} B)$ and of course $P(A|B)=P(A)$. But does that also mean that there's no front-door from B to A?

Because then we should get $P(A|do(B))=P(A)$. So if that's the case, does statistical independence automatically mean lack of causation?

So if that's the case, does statistical independence automatically mean lack of causation?

No, and here's a simple counter example with a multivariate normal, 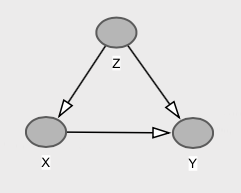 I think it's important to make some clarifications here regarding associations, interventions and counterfactuals.

Causal models entail statements about the behavior of the system: (i) under passive observations, (ii) under interventions, as well as (iii) counterfactuals. And independence on one level does not necessarily translate to the other.

Now, we can go one step further. We can have causal models where intervening on $X$ does not change the population distribution of $Y$, but that does not mean lack of counterfactual causation! That is, even though $P(Y|do(x)) = P(Y)$, for every individual their outcome $Y$ would have been different had you changed his $X$. This is precisely the case described by user20160, as well as in my previous answer here.

These three levels make a hierarchy of causal inference tasks, in terms of the information needed to answer queries on each of them.

Suppose we have a lightbulb controlled by two switches. Let $S_1$ and $S_2$ denote the state of the switches, which can be either 0 or 1. Let $L$ denote the state of the lighbulb, which can be either 0 (off) or 1 (on). We set up the circuit such that the lighbulb is on when the two switches are in different states, and off when they're in the same state. So, the circuit implements the exclusive or function: $L = \text{XOR}(S_1, S_2)$.

By construction, $L$ is causally related to $S_1$ and $S_2$. Given any configuration of the system, if we flip one switch, the state of the lightbulb will change.

But, as above, $L$ is causally related to $S_1$ and $S_2$. So, statistical independence does not imply lack of causation.

Based on your question, you can think like this:

In this regards, I believe that independence means a lack of causation. However, dependence doesn't necessarily imply causation.

1
If a study indicates no correlation between two variables, does it also indicate a lack of casual relationship?
152
Does causation imply correlation?
101
The Book of Why by Judea Pearl: Why is he bashing statistics?
28
Difference between rungs two and three in the Ladder of Causation
25
What is covariate?
25
Which Theories of Causality Should I know?
6
Is causal inference only from data possible?
4
Mix of terms causation and dependence in 'book of why'?
5
Can causal Bayes Nets compute counterfactuals? If so, are they "worse" than structural causal model counterfactuals?
2
Independence imply d-separation?
See more linked questions