The minimum multi-variate effective sample size (minESS) is defined in the R package mcmcse (where the function is implemented) as:

It depends on the number of free parameters being sampled by the MCMC algorithm, and on two other parameters: $\epsilon$, and $\alpha$, defined as:

In this answer the above parameters are described as:

This answer also describes $\alpha$ as the "confidence in your estimate" and $\epsilon$ as the "Monte Carlo error".

The meaning of $(\alpha\,, \epsilon)$ is still not entirely clear to me. Could you describe these parameters as basically as possible (ie: aimed at non-statisticians)?

The minESS function is trying to calculate the minimum effective samples needed for a certain estimation problem. To recognize the interpretation of $\epsilon$ and $\alpha$, let me first go over the sample size calculations for a one sample mean.

Now let's extend it to multiple dimensions. Suppose each $X_1, X_2, \dots X_n$ is a vector in $p$-dimensions and in order to capture cross-correlations we are creating multivariate confidence regions instead of individual confidence intervals for each component. This becomes more difficult because if $p$ is large then we may need to set a "half-width" for each component which will be exhaustive. In addition, all the components of $X_1$ may not be in the same units, so the half-width will really lose any interpretation.

Instead, an idea similar to "half-width" is used where we want an estimate $\bar{X}_n$ (which is a vector) so that the variability in the estimator is an $\epsilon$th fraction compared to the variability in the distribution from which it is sampled. To give some intuition on this, below is a plot from this thesis (Page 10) 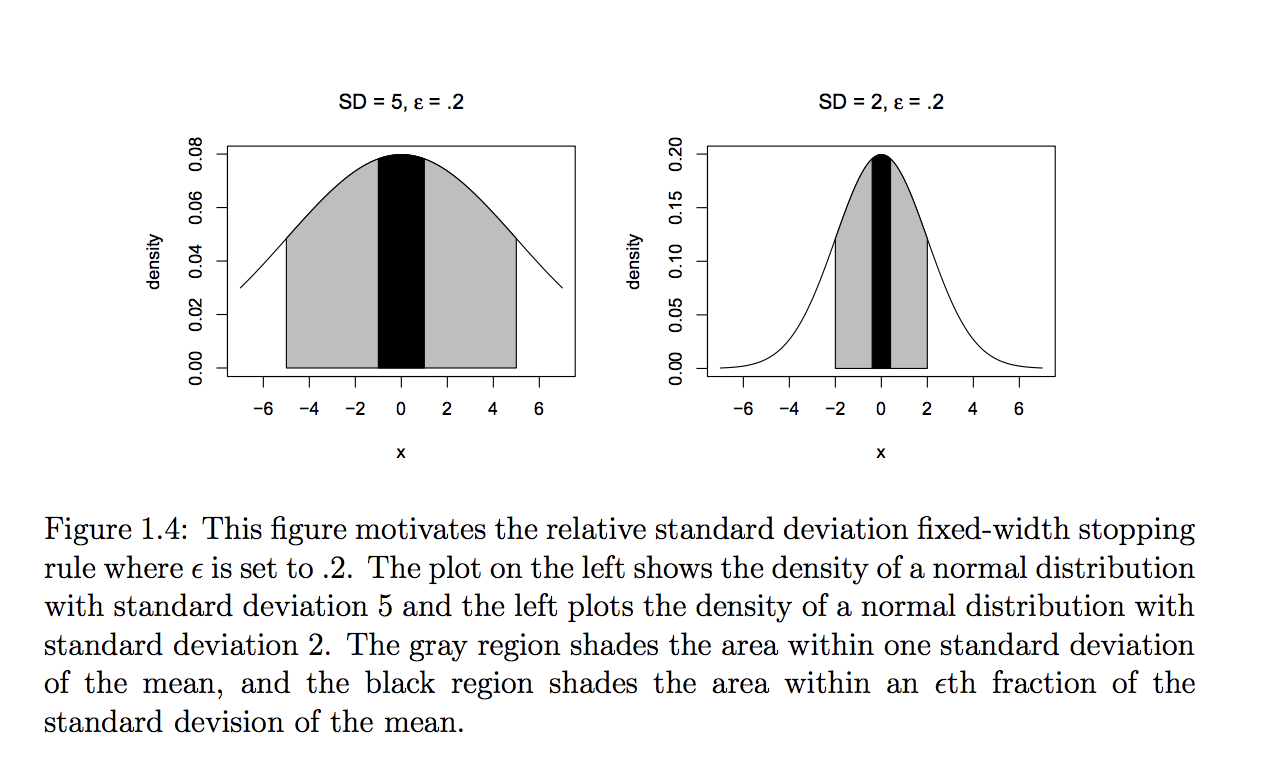 On the left you have a target distribution whose standard deviation $SD = 5$ indicated by the grey area. The black area is the $\epsilon * SD$ where $\epsilon = .2$. So for the left plot we want the "half-width" of the confidence region to be smaller than the black box. However, on the right plot, you have a distribution with a smaller variance, $SD = 2$. A black box exactly the same width of the left plot would be much too wide, but a relative idea, $\epsilon *SD$ would scale the black box appropriately down to a good size relative to that of $SD$.

In this way $\epsilon$ restricts the size of the confidence region relative to the inherent variability of the underlying distribution. $\alpha$ serves the same purpose as before since nothing is guaranteed due to randomness, a confidence level is needed. Now the way this is carried out (following notation in the link you provided), we get the required sample size when $$\text{Volume of Confidence region of $\bar{X}_n$}^{1/p} \leq \epsilon |\Lambda|^{1/2p}\,,$$ notice that this similar to the univariate case where the volume of a confidence region has to bounded by some quantity. Now, the volume of a confidence region is $ n^{-1/2} c_{\alpha,p} |\Sigma|^{1/2p}$, where $c_{\alpha,p}$ is a constant that depends on $\alpha$ and $p$. Moving things around, $$mESS \geq c_{\alpha,p}\,, $$ with $c_{\alpha, p}$ being provided here.

Not the answer you're looking for? Browse other questions tagged sample-size markov-chain-montecarlo posterior or ask your own question.