Calibration of an individual-based model of an epidemic

I am currently developing an individual-based (or agent-based) mathematical model (IBM) of an epidemic. I want to calibrate the transmission parameters in my IBM to match empirical data (epidemic curve time series) using least-squares. Suppose I have an epidemic curve that looks like this 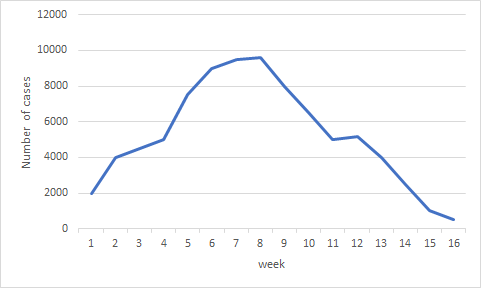 and this epidemic curve is based on a population of 60,000,000 (roughly the population of England). The peak incidence of the epidemic from this graph are in week 8: 9,600 cases. This gives 0.016% of the total population.

Technically, if your IBM treats individuals as discrete units, you won't even have 1.6 individual - you will have 2, maybe 1, individual.

A couple notes about your problem:

Fundamentally, smaller populations have noisier dynamics governed more by stochasticity than any underlying epidemic dynamics. This doesn't mean your approach is wrong. Just that the outcome of your approach isn't clean. Those are two very different things.

Not the answer you're looking for? Browse other questions tagged modeling epidemiology parameterization calibration or ask your own question.