Why does Off-Policy Monte Carlo Control only learn from the "Tails of Episodes"?

I was reading through section 5.7 of the second edition of Sutton and Barto's "Reinforcement Learning: An Introduction" when I came across this passage:

where the "method" that the author is referring to is the incremental, every-visit implementation for Off-Policy MC Control with weighted importance sampling covered earlier in the section and provided here for reference: 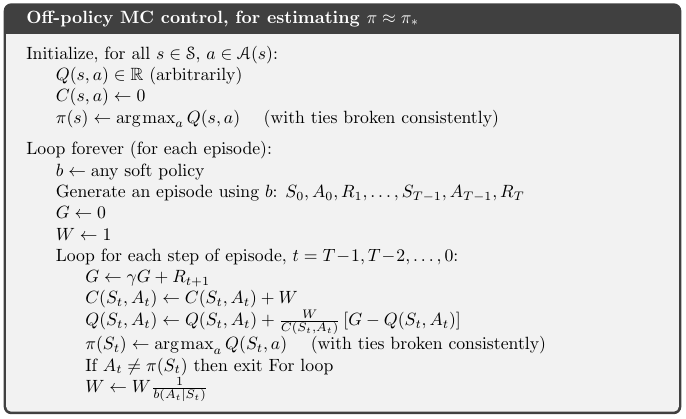 My question is this: why does the method above only learn from the tails of the episode, as the author suggests in the excerpt?

After searching around a bit, the only relevant link I could find online was here:

which is an online version of the first edition of the text. An excerpt from this link clarifies that what the author means by "the tails of episodes" is in fact "after the last nongreedy action." However, I still fail to see why all of the remaining actions after some point in an episode are guaranteed to be greedy, or how these greedy actions belong to the only time steps from which the above method can learn.

I still fail to see why all of the remaining actions after some point in an episode are guaranteed to be greedy,

It is not the case, there is no guarantee of any number of steps being greedy. The very last step can be non-greedy. In that case, then the only return that will get assessed in off-policy Monte Carlo control is for $S_{T-1}, A_{T-1}$. That step does get processed (and in general the last exploratory step in any trajectory), because you don't apply importance sampling to the action in the $Q(s,a)$ that is being updated.

If the target policy is the greedy policy over current $Q(s,a)$ (which it is in the given Monte Carlo Control algorithm), then any exploration will insert a multiplication by 0 into the importance sampling ratio (because $\pi(a|s)=0$ for exploring actions), making the adjusted return estimate zero regardless of any other values. In addition, the weighting when taking the mean also uses this factor, so there will be no change to any $(s,a)$ pair with a later exploratory action.

If you used non-weighted importance sampling, then in theory you do need to add these zeros into the mean Q estimates, because the denominator for the average return is the number of visits to each $(s,a)$. This adding of zeroes counters the over-estimates made when the trajectory from that point on is greedy (and multiplied by a factor of $\frac{1}{(1-\epsilon + \frac{\epsilon}{|\mathcal{A}|})^{T-t-1}}$ for example if you are using $\epsilon$-greedy).

$a^o$ is an off-policy or non-greedy action and $a^p$ is the best action according to the current policy (greedy action).

Ingredient 2 ensures, that new actions are tried, which eventually improves the current policy. This is the reason you use non-greedy actions. Otherwise, $Q(s, a)$ would only give you great predictions if $a$ is an action according to the current policy ($a=\pi(s)$) and horrible predictions for all other possible actions ($a\in A \backslash \{\pi(s)\}$). This corresponds to learning from the tail of an episode.

But this is not to be confused with learning from sequences of random actions!

Your algorithm learns backwards, i.e. starting with the last rewards and propagating this information step-wise forward to earlier times. If you try to learn from a state $s_{t=7}$ and a lot of off-policy actions follow later at $t \gt 7$, then the corresponding Q-value will be very low, as (most likely) you did a lot of unfavorable actions. Hence, the learning of your algorithms will be: I stick to my (non-optimal) policy for all early stages of the game. For the reason you do not (or just slowly) learn from early portions of the game if non-greedy actions are common.

Not the answer you're looking for? Browse other questions tagged monte-carlo reinforcement-learning importance-sampling or ask your own question.