I want to conduct an assessment of the annual citation rates for a group of patents before and after a particular intervention (namely the decision of the Supreme Court in Alice v CLS Bank, which I represent with a dummy value 0 or 1). Unfortunately, from the dataset I have collected, I have a fair amount of positive skew in the raw citation rate for each patents (some patents have 100 citations, others have 10). I have tried to filter out those patents that do not have any citations. Accordingly, I have log transformed those values as follows:

I then wanted to conduct a time series analysis to see whether there was a relative change in the number of LogCitations before and after Alice using the following model:

EDIT: I should mention that I am attempting to measure these effects over a 20 year period. I have adopted the lm model described above because I have read that using an ARIMA model requires at least 30 data points (which unfortunately I don't have, because patents only remain in force for 20 years).

EDIT: In response to Chris Haug's question below, I've added the acf and pacf values for the model1 residuals: 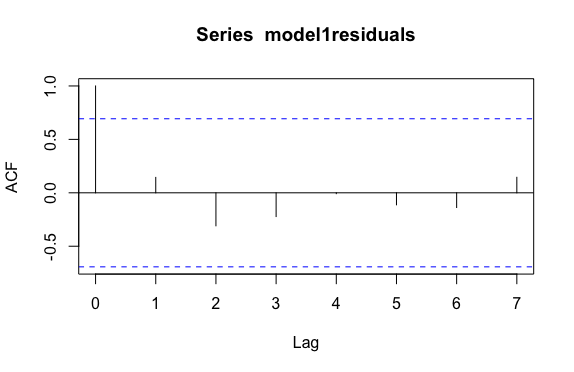 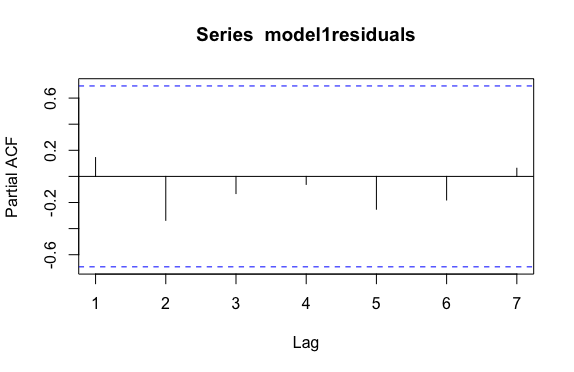 When you have count data like this, it is generally better to model it with a GLM using a negative binomial distribution (also known as negative binomial regression). This model operates directly on the count values and has its support on the non-negative integers, so it allows any counts of zero and also positive integer counts. The standard form of the negative-binomial regression uses a log-link function, so you still effectively use an implicit logarithmic transformation in your model, but you still allow counts of zero in your outcome. This is a major advantage over the model you have used, since removing count values of zero is almost certain to bias your analysis.

You can implement negative binomial regression using the glm.nb function in the MASS package. The syntax for a model using the same explanatory variable as your model would be as follows:

There is no guarantee that this model form will fit your data well, but it is the place I would start if I were looking at count data. In your existing model you have a simple binary comparison where the only explanatory variables is the indicator alice. If you have a reasonable amount of data (with non-overlapping years) and you want a richer model, you might consider adding factor(year) as another explanatory variable. To see if your model fits the data appropriately you should look at the residuals using diagnostic plots, and undertake model comparisons. In many cases you will find that the negative binomial regression gives good results.