Random process not so random after all (deterministic)

I would like to show (demonstrate by simulation) a random process that turns out after $i$ interactions to be deterministic, i.e. ends at predefined value (roughly) known at time $t=1$.

Conditions for the solution:

The meaning of surprising in this case: I mean, during the generating process, the observer expectation is not (rational?) .... (Surprise in sense of conviction that random is not random after all).

Does it matter whether the terminal (final) value is revealed to observer a priori (at the beginning of the generating process series) or after the process ends (to confirm the values match)?

1) If solution is not provided, how to approach it? (any hint helps)

2) Which tool (statistical/modeling) should be used? How to set up the process?

Simulate a (large) number of identically distributed but dependent random variables, such that their sum is ideally equal to a prespecified value, or failing that (for continuous RVs, we will hit a single number with probability 0), which is in a given range with a given probability. (with @Stephan kind help.)

Suppose that after $T$ iterations, your process should end up at a predefined value $m$.

You can first simulate a process $f_t$ with whatever characteristics you want and then modify it as follows:

Note that this requires that we know the end value $f_T$ of the unconstrained process when we modify it at time $t$. 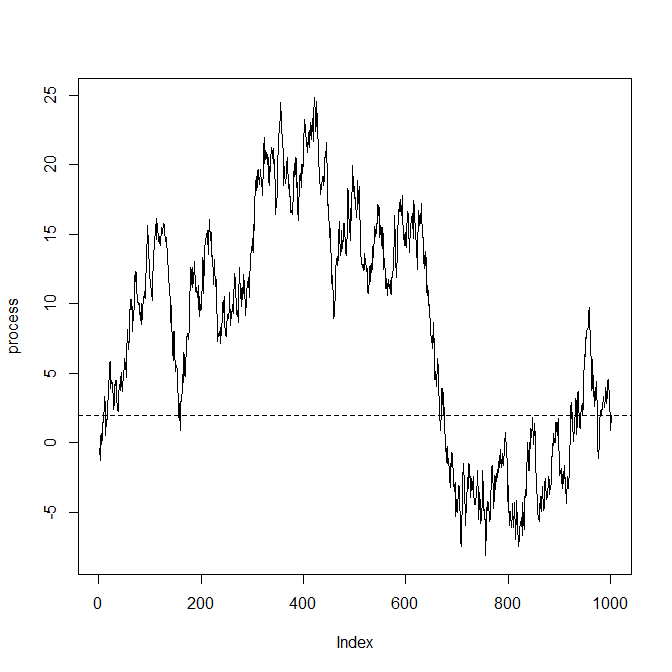 If you need something that can be calculated at time $t$ without "looking ahead", you can use $f_t$ instead of $f_T$ in the above formula.

However, then your process will have lower and lower variance as $t\to T$: 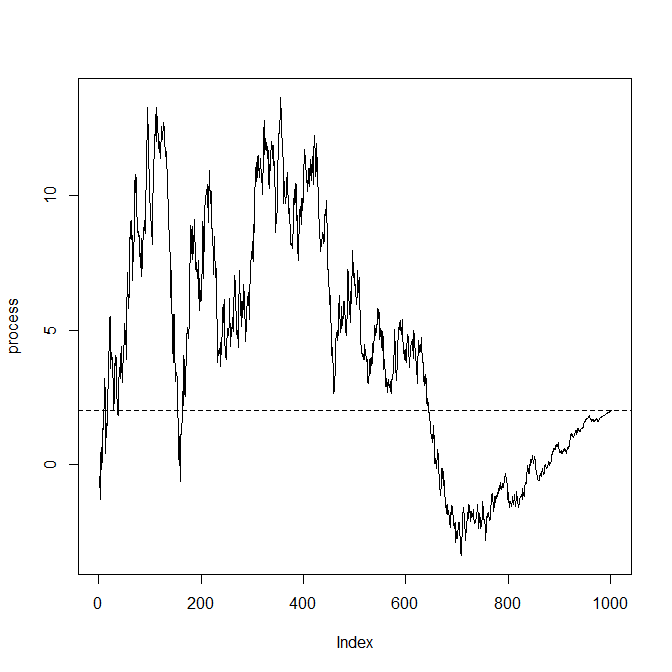 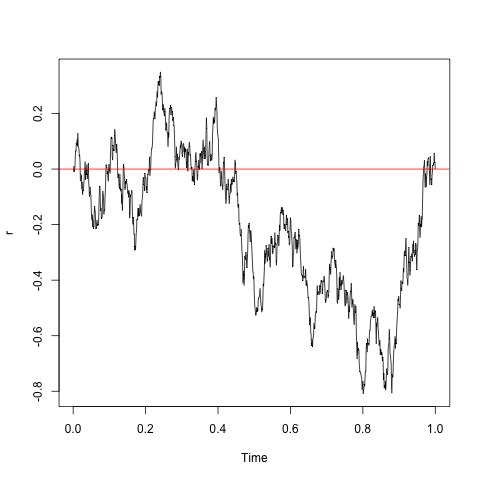 The underlying code for rbridge is pretty simple:

Stripped of its extra details, this corresponds to $B(t) = W(t) - t/T \cdot W(T)$, where $W$ is a Wiener process and $T$ is the ending time, as suggested in the Wikipedia article.

This simulates a Brownian bridge that starts and ends at zero; I would suggest adding a linear trend if you want to modify the starting and ending points (as suggested by the "general case" section of the Wikipedia article). 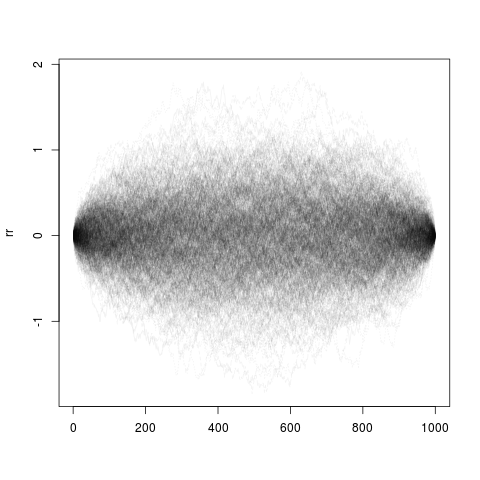 A comment on a previous version of this answer argued that the volatility would not be constant; based on a numerical experiment (easier than thinking), I believe this is false - the volatility is constant (we can also see this by looking at the $B(t)$ expression above ...

However, a careful observer should be able to detect that something is going on, because $\Delta x$ will be biased toward the starting point (similar to, but not the same as, an Ornstein-Uhlenbeck process).

Not the answer you're looking for? Browse other questions tagged r random-variable simulation monte-carlo random-generation or ask your own question.