Strange behavior of Gamma prior in a setting with binomial likelihood

I am trying to use Bayes theorem to estimate the probability of a binary event. To give a (simplified) example: Let's say our a priori guess of the probability of the event per trial is 0.3 (and the probability of no event is 0.7). We use the model parameter $\beta > 0$ to scale this a priori guess, so that the probability of an event can be expressed as $p=0.3^{\beta}$. The parameter $\beta$ is estimated in the Bayesian framework, hence the posterior distribution is calculated as $\pi(\beta\mid Y) \propto \pi(\beta) L(Y\mid\beta)$, where $L(Y\mid\beta)=\prod \left(0.3^{\beta}\right)^{Y_i} \left(1-0.3^{\beta}\right)^{1-Y_i} $ and $Y_i$ denotes the outcome of the $i$th trial. As (reasonably uninformative) prior distribution for $\beta$ I use $\pi(\beta)=Gamma(shape=1,rate=1)$. The median of the posterior distribution is going to be used as best estimate to scale the probability, but other quantiles may be of interest, too. I have implemented this simple model in OpenBUGS and checked it with an R package (bcrm) which uses RJags and the results were the same. For example, if we observed three trials, and no event occured, the posterior median of $\beta$ is $1.19$, corresponding to posterior probability $0.3^{1.19}=0.24$, which seems to be a reasonable conclusion.

So, here comes the issue: I would also like to express my prior belief with an informative prior distribution for $\beta$. I thought, a natural choice would be to use $Gamma(shape=20,rate=20)$, since the mean would be again at 1, while it is more centered around 1 compared to $Gamma(1,1)$. But with this prior distribution, the posterior distribution is totally misleading, at least if there are no events observed. If again, we have 3 trials but 0 events, the posterior median of $\beta$ is calculated to be $96.6$, corresponding to a probability of event $0.3^{96.6}=0.00000000$, which is not at all what I would have expected, since the prior distribution of the probability was more centered around 0.3? What is happening here?

I am pretty sure, I am missing basic properties of either the Gamma distribution or Bayesian inference (or both), so I would be glad if someone could point these out to me.

For visualization, I've added images of the histograms of random values from the distribution of both prior distribution and the corresponding prior scaled probabilities.

One does not need packages to check the posterior: a simple call to curve and defining

shows that the outcome is correct: 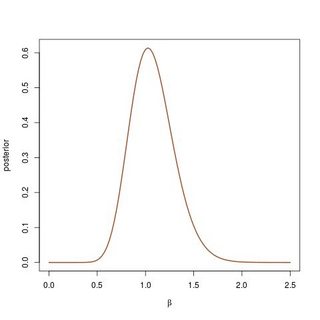 Hence there is a mistake in the derivation of the posterior median.

Not the answer you're looking for? Browse other questions tagged probability bayesian prior gamma-distribution or ask your own question.