This question is in response to an answer given by @Greg Snow in regards to a question I asked concerning power analysis with logistic regression and SAS Proc GLMPOWER.

If I am designing an experiment and will analze the results in a factorial logistic regression, how can I use simulation ( and here ) to conduct a power analysis?

Here is a simple example where there are two variables, the first takes on three possible values {0.03, 0.06, 0.09} and the second is a dummy indicator {0,1}. For each we estimate the response rate for each combination (# of responders / number of people marketed to). Further, we wish to have 3 times as many of the first combination of factors as the others (which can be considered equal) because this first combination is our tried and true version. This is a setup like given in the SAS course mentioned in the linked question.

The model that will be used to analyze the results will be a logistic regression, with main effects and interaction (response is 0 or 1).

How can I simulate a data set to use with this model to conduct a power analysis?

When I run this through SAS Proc GLMPOWER (using STDDEV =0.05486016 which corresponds to sqrt(p(1-p)) where p is the weighted average of the shown response rates):

Note: GLMPOWER only will use class (nominal) variables so 3, 6, 9 above are treated as characters and could have been low, mid and high or any other three strings. When the real analysis is conducted, Var1 will be used a numeric (and we will include a polynomial term Var1*Var1) to account for any curvature.

The output from SAS is 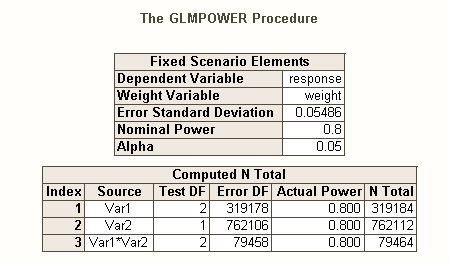 Let's say your posited response rates represent the true situation in the world, and that you had sent out 10,000 letters. What is the power to detect those effects? (Note that I am famous for writing "comically inefficient" code, the following is intended to be easy to follow rather than optimized for efficiency; in fact, it's quite slow.)

So we see that 10,000 letters doesn't really achieve 80% power (of any sort) to detect these response rates. (I am not sufficiently sure about what the SAS code is doing to be able to explain the stark discrepancy between these approaches, but this code is conceptually straightforward--if slow--and I have spent some time checking it, and I think these results are reasonable.)

From here the idea is simply to search over possible $N$'s until we find a value that yields the desired level of the type of power you are interested in. Any search strategy that you can code up to work with this would be fine (in theory). Given the $N$'s that are going to be required to capture such small effects, it is worth thinking about how to do this more efficiently. My typical approach is simply brute force, i.e. to assess each $N$ that I might reasonably consider. (Note however, that I would typically only consider a small range, and I'm typically working with very small $N$'s--at least compared to this.)

Instead, my strategy here was to bracket possible $N$'s to get a sense of what the range of powers would be. Thus, I picked an $N$ of 500,000 and re-ran the code (initiating the same seed, n.b. this took an hour and a half to run). Here are the results:

We can see from this that the magnitude of your effects varies considerably, and thus your ability to detect them varies. For example, the effect of $var1^2$ is particularly difficult to detect, only being significant 6% of the time even with half a million letters. On the other hand, the model as a whole was always significantly better than the null model. The other possibilities are arrayed in between. Although most of the 'data' are thrown away on each iteration, a good bit of exploration is still possible. For example, we could use the significant matrix to assess the correlations between the probabilities of different variables being significant.

I should note in conclusion, that due to the complexity and large $N$ entailed in your situation, this was not as simple as I had suspected / claimed in my initial comment. However, you can certainly get the idea for how this can be done in general, and the issues involved in power analysis, from what I've put here. HTH.

@Gung's answer is great for understanding. Here is the approach that I would use:

This function tests the overall effect of v2, the models can be changed to look at other types of tests. I like writing it as a function so that when I want to test something different I can just change the function arguments. You could also add a progress bar, or use the parallel package to speed things up.

Here I just did 100 replications, I usually start around that level to find the approximate sample size, then up the itterations when I am in the right ball park (no need to waste the time on 10,000 iterations when you have 20% power).

Not the answer you're looking for? Browse other questions tagged r logistic generalized-linear-model simulation statistical-power or ask your own question.