I have the following dataset with daily home range sizes (meter95, meter50) per individual:

I am trying to figure out which distribution to fit to the home range data. However, the data seems to be very right-skewed: 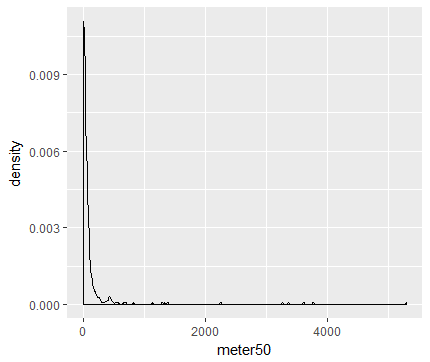 I tried to fit other regular distributions, through fitdistr() but none of these fit (just showing a few here): 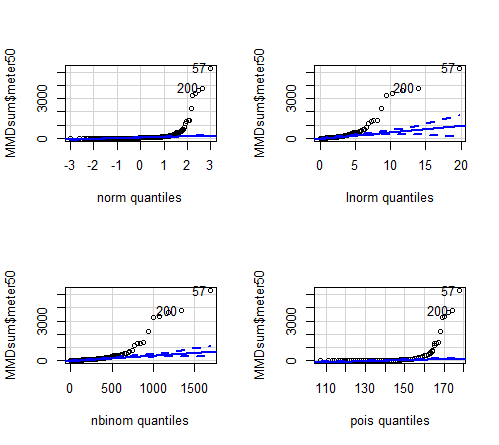 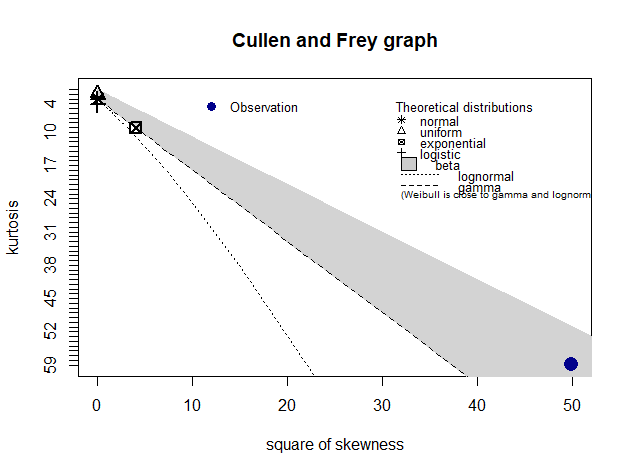 I am quite new to this, so I am not sure how to go from here and whether the Cullen and Frey graph really gives me the right distribution. I read on other forums that it doesn't always give the best fit. I also thought my data could maybe fit an inverse-Gaussian distribution, for example, but Cullen and Frey does not include that option.

Also, I wonder if it might be possible to transform my data so it does fit one of the more common distributions? Is that possible when building glmer() models?

First, use your knowledge to simplify the problem; you know things the data do not.

However, the beta regression requires your dependent variable to be between 0 and 1. This can be accomplished pretty easily by rescaling the data, as is suggested by Smithson and Verkuilen (2006) in Psychological Methods, p. 57.

The tougher part is that your data seem to be multilevel (from your mention of the glmer function). That is, some observations are dependent on others (because they are from the same individuals or tracks or whatever). The gamlss package has a ton of error distributions (including the beta distribution) that you can choose from, and it handles random effects, as well. There are a bunch of articles and even a few books based on this package: http://www.gamlss.com/books-articles/.

I worry that the issue you will still run into is that you will be fitting a model with a lot of distributional assumptions (e.g., conditional values of the DV follow a beta distribution, intercepts follow a normal distribution, etc.) that might be violated (and to which the algorithm won't be robust) or that will be very difficult to converge on a solution.

I would try out some of the latter methods by looking into the very flexible gamlss package, but I would also try to simplify the analysis if you can. You do not need to model the conditional values of the dependent variable perfectly to get at a useful result.

Not the answer you're looking for? Browse other questions tagged r distributions lme4-nlme glmm or ask your own question.