Does the optimal number of trees in a random forest depend on the number of predictors?

During classification the subspace dimensionality is $\sqrt{p}$ (rather small, $p$ is the total number of predictors) by default, but a tree contains many nodes. During regression the subspace dimensionality is $p/3$ (large enough) by default, though a tree contains fewer nodes. So the optimal number of trees in a random forest depends on the number of predictors only in extreme cases.

The official page of the algorithm states that random forest does not overfit, and you can use as much trees as you want. But Mark R. Segal (April 14 2004. "Machine Learning Benchmarks and Random Forest Regression." Center for Bioinformatics & Molecular Biostatistics) has found that it overfits for some noisy datasets. So to obtain optimal number you can try training random forest at a grid of ntree parameter (simple, but more CPU-consuming) or build one random forest with many trees with keep.inbag, calculate out-of-bag (OOB) error rates for first $n$ trees (where $n$ changes from $1$ to ntree) and plot OOB error rate vs. number of trees (more complex, but less CPU-consuming). 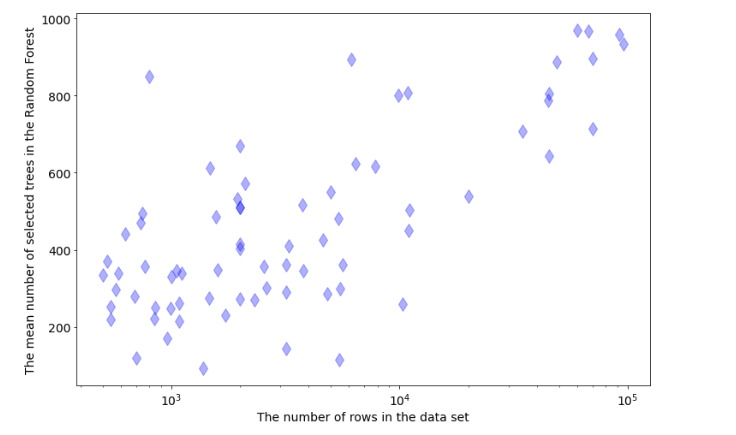 Accordingly to this article

They suggest that a random forest should have a number of trees between 64 - 128 trees. With that, you should have a good balance between ROC AUC and processing time.

i want add somthings if you have more than 1000 features you and 1000 rows you can't just take rondom number of tree .

Not the answer you're looking for? Browse other questions tagged machine-learning random-forest or ask your own question.