I am trying to run a two-way repeated measures anova in spss but i think my data needs restructuring. I have run anova's in spss before so i am familiar with process. The problem is that when i have previously run a two-way repeated measures anova it has been using two sets of numerical values (times). In this case i am trying to look for significance between a set of numerical data (times) against what is effectively a categorical variable (as seen in be data outlining below). The version order is a variable (column) and so it appears when i'm defining the anova test within spss.

My issue is that when i define the subject factors and levels within spss: 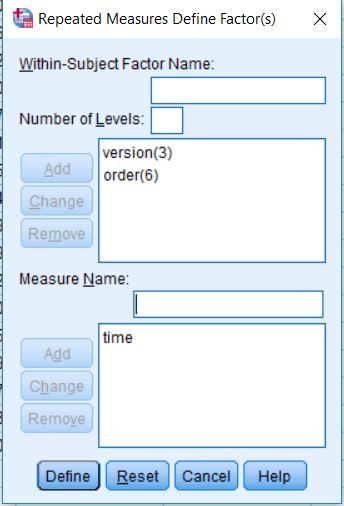 On the next screen i have to enter all the variables. 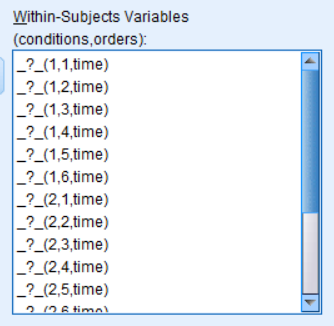 But i only have four variables to use.

As you can see from the basic outline of my data at the bottom, the version order is in one variable. I don't have a variable for each order sequence.

I have 'long' and 'wide' versions of my data

I believe i found the solution, a Mixed ANOVA :)

Not the answer you're looking for? Browse other questions tagged anova repeated-measures spss two-way or ask your own question.