What's the intuition for a Beta Distribution with alpha and / or beta less than 1?

I am curious for myself, but also trying to explain this to others.

As expected, a beta distribution with $\alpha=\beta=1$ is equivalent to a uniform distribution.

But the beta distribution can have values less than 1 (any non-negative number). At the extreme case, $\alpha=\beta=0$ yields a bimodal PDF (probability density function) with values at only 0 and 1. I can still intuit this: it represents a case like flipping a coin - not the probability of heads or tails, but rather the outcomes: there are only 2 possibilities, 0 or 1 (or heads or tails).

But any $\alpha$ or $\beta$ value between 0 and 1 I cannot find a good way to explain or think about. I can calculate it, but not really grok it.

Bonus points for anyone who can help explain the difference between a conjugate prior using what to me seems it should provide no information, which would be a beta distribution with $\alpha=\beta=1$, and what is actually used as a prior with no information, the Jeffrey's Prior, which uses $\alpha=\beta=0.5$.

Looks like I need to be clearer. I am looking to understand, conceptually what natural phenomenon might be represented by a beta distribution with $\alpha=\beta=\frac{1}{2}$.

Or even with positive integer beta distributions, I can say:

What sort of similar construct or meaning could I create for the beta distribution with $\alpha=\beta=\frac{1}{2}$?

I am not looking for a plot. As I said earlier, I know how to work with a beta distribution mathematically (plot it, calculate it, etc.) I am just trying to get some natural intuition.

Here is a frivolous example that may have some intuitive value.

In US Major League Baseball each team plays 162 games per season. Suppose a team is equally likely to win or lose each of its games. What proportion of the time will such a team have more wins than losses? (In order to have symmetry, if a team's wins and losses are tied at any point, we say it is ahead if it was ahead just before the tie occurred, otherwise behind.)

Suppose we look at a team's win-loss record as the season progresses. For our team with wins and losses are as if determined by tosses of a fair coin, you might think a team would most likely be ahead about half the time throughout a season. Actually, half the time is the least likely proportion of time for being ahead.

The "bathtub shaped" histogram below shows the approximate distribution of the proportion of time during a season that such a team is ahead. The curve is the PDF of $\mathsf{Beta}(.5,.5).$ The histogram is based on 20,000 simulated 162-game seasons for a team where wins and losses are like independent tosses of a fair coin, simulated in R as follows: 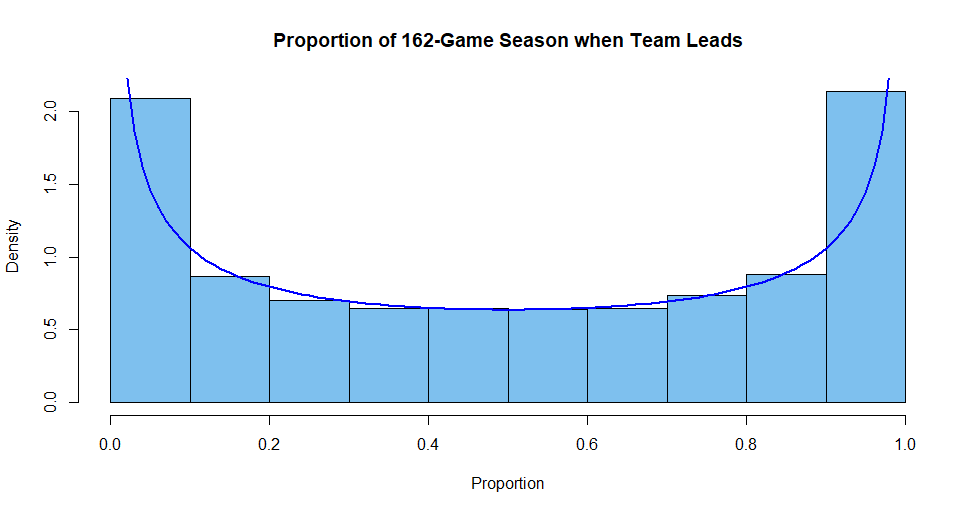 Note: Feller (Vol. 1) discusses such a process. The CDF of $\mathsf{Beta}(.5,.5)$ is a constant multiple of an arcsine function, so Feller calls it an 'Arcsine Law'.

It occurred to me that this "bathtub-shape" is due to any random process with saved state.

So I wanted to write a quick answer that might help others like me, who understand the math and are not novices, but who like to find cases which demonstrate the natural phenomenon.

If you take for example $\alpha=\beta=0.5$, then the pdf looks like a horse-shoe, with high density near ends of the interval $(0,1)$ and low density near $0.5$. So as a prior, it puts a lot of density on the extremes, and that helps the posterior have a similar shape.

I understand it as a device to help the posterior move away from $50\%$ and towards $0$ or $1$, which can be helpful if you are trying to make a binary decision.

Not the answer you're looking for? Browse other questions tagged bayesian intuition beta-distribution jeffreys-prior or ask your own question.