why does k-medoids ignore between-cluster distances

The k-medoids algorithm is a popular distance-based clustering algorithm. It uses a heuristic algorithm to assign samples to clusters based on centroids, which are itself samples. It's cost function is simply the sum of within-cluster sample-to-centroid distances.

I have observed unintuitive behaviour of the k-medoids algorithm and have followed it up with a simple experiment: I sampled varying numbers of observations from two-dimensional gaussian distributions with varying between-cluster distances. I used the k-medoids algorithm to assign cluster labels and then used the adjusted RAND-index to compare the ground truth to the assigned labeling. Under circumstances of extreme group size differences, the k-medoids algorithm (arguably) fails to find the obvious clustering: 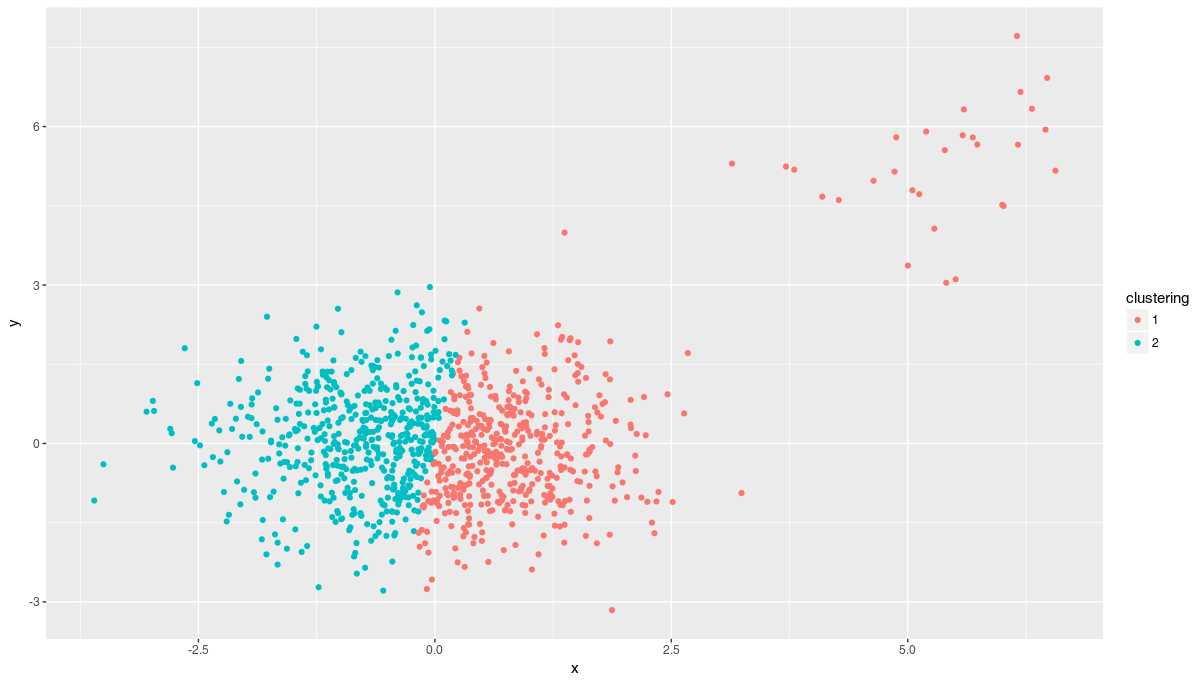 Is the k-medoids cost function really as bad as I think it is, i.e. couldn't it be (strictly) improved by taking into account between-cluster distances as well?

The sum of all pairwise distances obviously is a constant.

Because of that, minimizing the within cluster distances is obviously equivalent to maximizing the sum of distances between clusters.

So it does actually optimize that, too!

The real question is, whether the sum-of-distances is worth minimizing. Or whether you'd rather want to maximize the fit of a Gaussian model as in GMM or fit a density model as in DBSCAN instead.

In your toy example, note that the left cluster has many pairs of points whose distances are almost the entire cluster. Compare this to the few points your smaller cluster has in total - of course it is more important to split the huge cluster than to get the small cluster perfectly right.

K-means: Why minimizing WCSS is maximizing Distance between clusters?

Not the answer you're looking for? Browse other questions tagged clustering k-medoids or ask your own question.

7
K-means: Why minimizing WCSS is maximizing Distance between clusters?

2
Hybrid (K-means + Hierarchical ) clustering
2
Fuzzy C-means and its stages of clustering
7
Run time analysis of the clustering algorithm (k-means)
3
Hierarchical clustering, linkage methods and dynamic time warping
4
Incorporating new words in tfidf feature-vector for online clustering
0
Compare clustering results based on intra cluster similarity
0
Use clustering to create labels of unlabeled data and then classify a test set (available or not in the clustering)?
9
Adjusted Rand Index vs Adjusted Mutual Information
0
How to select a single updated centroid if multiple centroids are equidistant for a single group when running k-means/k-medoids?