To summarise the predictive power of a classifier for end users, I'm using some metrics. However, as the users input data themselves, the amount of data and class distribution varies a lot. So to inform users about the strength of the metrics, I'd like to include confidence intervals.

Background on the metrics

Suppose a binary classifier that is to classify 1000 items. Of those items, 700 belong to A, and 300 to B. The results are as follows:

There are some metrics defined for this classification:

This Stack Overflow question addresses confidences of recall or precision. It suggests using an adjusted version of recall: $\text{recall} = (TP+2) / (TP+FN+4)$ and the Wilson Score interval. The final formula would be

There's something I don't understand about this approach. The formula resembles the confidence interval for a binomial distribution, but it's not quite the same. Neither is it the Wilson formulation. Where does that additional $+4$ come from? Maybe it is from the recall formula.

He mentions that $p$ is calculated using the adjusted recall. That would imply $recall = \hat{p}$, which is reinforced by the error formula. So let's use the Wilson formulation for $p$. With $n=TP+FN=300$ the final calculation with a confidence of $\alpha=0.05$ yields $z=1.96$ and:

While this does seem like a sensible result, I still wonder about the formula and the differences between the formulae presented. What could be the basis for the $\text{std_err}$ formula? Is it better to use the Wilson formula instead?

A similar formulation could be used for calculating the confidence interval for precision using false positives instead of false negatives. How would this idea carry to the F1 score, which is a combination of the two, if at all?

My statistic skills and intuition isn't so strong yet, so any help or insight is greatly appreciated!

Different approaches have little effect at least in this case

For smaller samples they start to vary a bit more, especially with the interval. The Wilson approach seems to give the largest intervals.

To give some quick answers to the points raised:

The additional "$+4$"observed when calculated the "adjusted version of recall". This comes from the viewing the occurrence of a True Positive as a success and the occurrence of a False Negative as a failure. Using this rationale, we follow the general recommendation from Agresti & Coull (1998) "Approximate is Better than 'Exact' for Interval Estimation of Binomial Proportions" where we "add two successes and two failures" to get adjusted Wald interval. As $2 + 2 = 4$, our total sample size increases from $N$ to $N+4$. As the authors also explain it is "identical to Bayes estimate (mean of posterior distribution) with parameters 2 and 2". (I will revisit this point in a end).

The basis for the standard error formula shown. This is the also motivated by the "add two successes and two failures" rationale. This drives the $+4$ on the denominator. Regarding the numerator, please note that the estimate $\hat{p}$ should be adjusted too as mentioned above. A bit more background: assuming a 0.95 CI with $z^2 = 1.96^2 \approx 4$, then the midpoint of this adjust interval $\frac{(X+\frac{z^2}{2})}{(n +z^2)} \approx \frac{X+2}{n+4}$. Interestingly is also nearly identical to the midpoint of the 0.95 Wilson score interval.

How this carries forward to the calculations of $F_1$. This correction in itself ($+2$ and $+4$) is somewhat trivial to be also to the calculation of the $F_1$ score;we can apply it on how we calculate Precision (or Recall) and use the result. That said, calculating the standard error of the $F_1$ is more involved. While working with the linear combination of independent random variables (RVs) is quite straightforward, $F_1$ is not a linear combination of Precision and Recall. Luckily we can express it as their harmonic mean though (i.e. $F_1 = \frac{2 * Prec * Rec}{Prec + Rec}$. It is preferable to use the harmonic mean of Precision and Recall as the way of expressing $F_1$ because it allows us to work with a product distribution when it comes to the numerator of the $F_1$ score and a ratio distribution when it comes to the overall calculation. (Convenient fact: The mean calculations are straightforward as the expectation of the product of two RVs is the product of their expectations.)

As mentioned A&C (1998) also suggests that this correction is "identical to Bayes estimate (mean of posterior distribution) with parameters 2 and 2". This idea is fully explored in Goutte & Gaussier (2005) A Probabilistic Interpretation of Precision, Recall and F-Score, with Implication for Evaluation. Effectively we can view the whole confusion matrix as the sample realisation from a multinomial distribution. We can bootstrap it, as well as assume priors on it. To simplify things a bit a will just focus on Recall which can be assumed to be just the realisation of a Binomial distribution so we can use a Beta distribution as the prior. If we wanted to use the whole matrix we would use a Dirichlet distribution (i.e. a multivariate beta distribution). For the bootstrap also keep in mind that as Hastie et al. commented in "Elements of Statistical Learning" (Sect. 8.4) directly: "we might think of the bootstrap distribution as a "poor man's" Bayes posterior. By perturbing the data, the bootstrap approximates the Bayesian effect of perturbing the parameters, and is typically much simpler to carry out."

OK, some code to make these concrete. 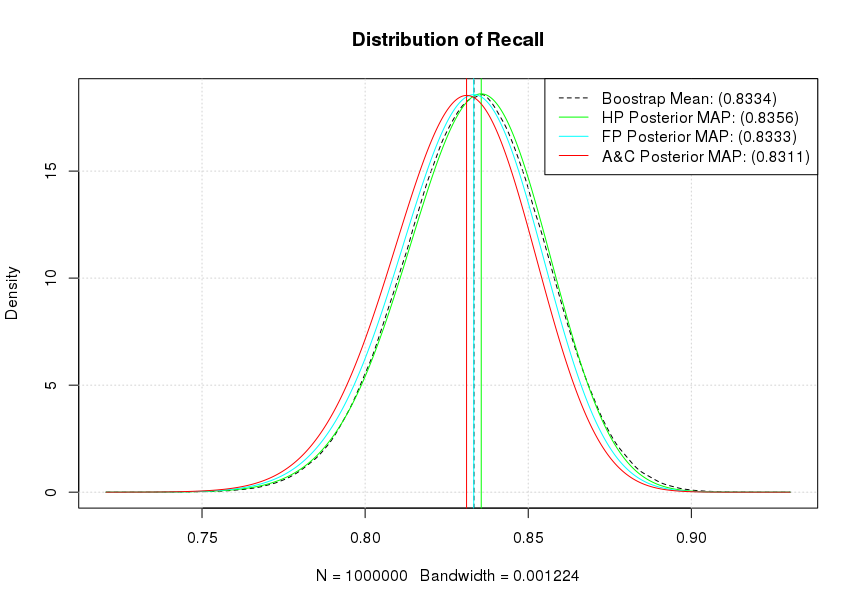 As it can be seen our flat prior's (Beta distribution $B(1,1)$) posterior MAP and our bootstrap estimates effectively coincide. Similarly, our A&C posterior MAP shows the strongest shrinkage towards a mean of 0.50 while the Haldane prior's (Beta distribution $B(0,0)$) posterior MAP is the most optimistic for our Recall. Notice that if we accept a particular posterior, the actual 0.95 CI calculation becomes trivial as we can directly get it from the quantile functions. For example, assuming a flat prior qbeta(1-0.025, 251,51) will give us the upper 0.95 CI for the posterior as 0.8711659. Similarly the posterior mean is estimated as $\frac{\alpha}{\alpha + \beta}$ or in the case of a flat prior as 0.8311 (251/(251+51)).

Not the answer you're looking for? Browse other questions tagged machine-learning confidence-interval binomial-distribution precision-recall confusion-matrix or ask your own question.

2
Standard deviation of recall, precision, accuracy and F-score?
6
How to calculate confidence intervals for Precision & Recall (from a signal detection matrix)?
3
What can be said about Precision-Recall when combining binary classifiers using unanimous voting?
1
Precision and recall in content-based recommender
2
Harmonic mean of precision, recall and specificity
2
Precision-Recall curve interpretation
0
How to calculate precision and recall with only one object class?
1
How does recall help precision overcome "length-related problems?"
4
What is the *finite-population correction* for the Wilson score interval (for a binary proportion)?
2
Precision and recall estimated with stratified sampling