How does a bayesian interpret a null association?

After reading about the bayesian approach, I'm wondering how they would interpret a null finding from a regression coefficient. I ask because in a frequentist approach, if the p<.05 you'd say that there was an association between two variables, and if p>.05 you'd say that it wasn't.

I guess my question is how does a bayesian describe their result when they get a situation like this from the frequentist context: participant height was not associated with participant shoe size, b=.05, p=.40.

I would strongly oppose the answer of @Dave Harris.

What do frequentists do?

The make assumptions about the true underlying relations of the random variables, compute some new realization of a random variable that has a certain distribution they know (due to the assumptions on the underlying relations) and then see how 'probable' it is that this random variable produced this concrete realization. So this is in no way a 'direct' assertion of the probability of the parameter being zero or so. In short: "It seems to be accepted by the community" to transfer the assertion to some object/setting/... topic and then make this related object/setting/... precise.

What do Bayesians do? 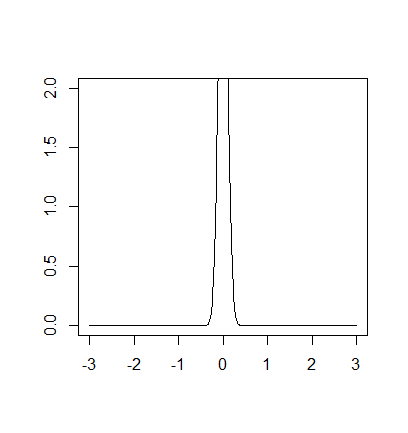 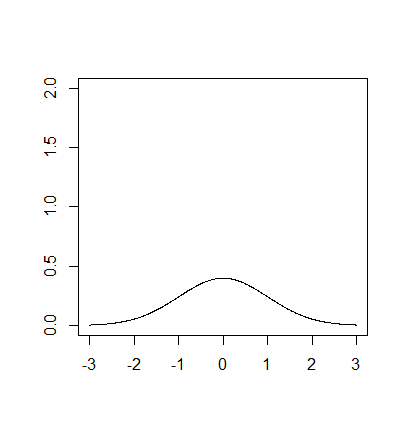 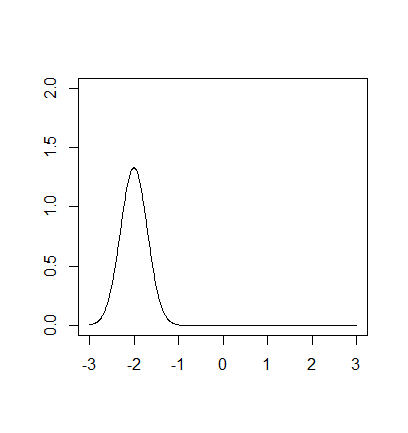 Situation 1: The mean and highest peak of the density is around 0 so the model suspects $\beta_1$ to be zero. The fact that there is almost no deviation from that value (i.e. the density put very much mass around a very small space around 0) tells us that the model is very certain that $\beta_1=0$. This corresponds to th case where the Null hypothesis can be rejected, we can safely claim that $\beta_1=0$.

Situation 2: The mean and highest peak of the density is around 0 so the model suspects $\beta_1$ to be zero. However, the peak is much smaller and the density puts a lot of mass outside that region around 0. Hence, the model suspects that $\beta_1=0$ but it 'cant prove it'/it is uncertain. This corresponds to the situation where the Null hypothesis may be right but we do not have enough evidence to reject it. In this case we tell our boss that (using this model) it might be true that $\beta_1=0$ but we cannot prove it. So either we need to change the model (this can be dangerous and could correspond to 'p-Hacking') or we need to collect more data.

Situation 3: The mean and highest peak of the density is around -2 so the model suspects $\beta_1$ to be $-2$. However, it is not as certain as in situation 1. So like in the frequentists approach (they set the acceptance threshold to p=0.05 which is absolutely arbitrary! Why not 0.01 or 0.0001?) it is up to you to define a measure/threshold that applies to the density in order to decide whether or not you want to state that $\beta_1=-2$ in that case. However, if the question is whether or not $\beta_1=0$ then again, the mass the density puts around $0$ is VERY little so we can safely claim that $\beta_1 \neq 0$.

Within Bayesian statistics, competing hypotheses about the model parameters are generally tested by comparing the posterior probability of competing parametric hypotheses under a given prior.$^\dagger$ This is usually done using Bayes factor to write the ratio of posterior probabilities for a given ratio of priors. Given observed data $\mathbf{x}$ and disjoint parametric hypotheses $\theta \in \Theta_0$ and $\theta \in \Theta_A$ we have:

Bayes factor can be calculated from the likelihood $L_\mathbf{x}$ and prior $\pi$ as:

$^\dagger$ There are some papers that explore "Bayesian p-values" which are quantities that are somewhat similar to the frequentist p-values except that they are calculated as posterior quantities (see e.g., Meng 1994, Gelman 2003 and Gelman 2012). These are less commonly used than the standard posterior parametric comparison using Bayes factor.

I like @Ben (though I don't think we need to rely on Bayes factors necessarily) and @FabianWerner's answers. I'd like to add that Bayesian statistics allow us to not be so strict: An association of exactly zero is highly improbable in most settings. So instead of having a rigid straw-man null hypothesis of "r = 0," (the null hypothesis that frequentist statistics assume and test against), we can get a posterior distribution and see regions where we are most confident that the parameter lies.

If the posterior distribution of the parameter is centered tightly around zero, we can believe that there's probably a practically null relationship (e.g., close enough to zero that we don't care).

Frequentists can't do this—they assume the null is true. A p-value is the probability we observe our data (or more extreme data), given that the null hypothesis is true. It can't tell us anything about the null, because it is (a) a rather meaningless null in most situations, and (b) it assumes this null is true. This comes up a lot when we have such big samples that almost anything is significant in frequentist statistics. Since the null hypothesis is a parameter being precisely 0.0000000..., then even a small deviation can be "significant." I like that Bayesian statistics allow us to look at probabilities of where the parameter is likely to be, so we can see how likely it is that the parameter falls in a range of values we don't care about. If my client wants at least a one percentage point increase, I can specify how likely it is that we get a one percentage point increase, how likely it is that we get -1 to +1 change (where we don't really care—a null association for all intents and purposes), and how likely it is to get an increase of -1 or less (a backlash effect).

Because parameters are random variables, for those on a continuum such as the real numbers, $\Pr(\beta_x=0)=0$ since it is a countable point in an uncountable set. There is no direct method to test a no association hypothesis in Bayesian methods.

Not the answer you're looking for? Browse other questions tagged hypothesis-testing bayesian frequentist or ask your own question.