What statistical tool do i use to determine the assocation between a nominal variables with three options and a continuous variable ?) [duplicate]

My topic is on: Relationship between age of teachers and academic performance of students in Mathematics.

Comment: First, I suggest you look at the Wikipedia article, which has some reasonably clear explanations and some helpful plots. There are three common methods of measuring correlation, due to Pearson, Spearman, and Kendall.

First, I suggest you make a scatterplot of your data to see if there seems to be any kind of trend of performance changing with age. If there is, you can decide if the association is positive or negative, and whether or not it is mainly linear.

Below are some (totally fake) numerical data on performance plotted against age. There seems to be mainly a negative association--especially for ages above 30. Also, the relationship is pretty clearly not linear. 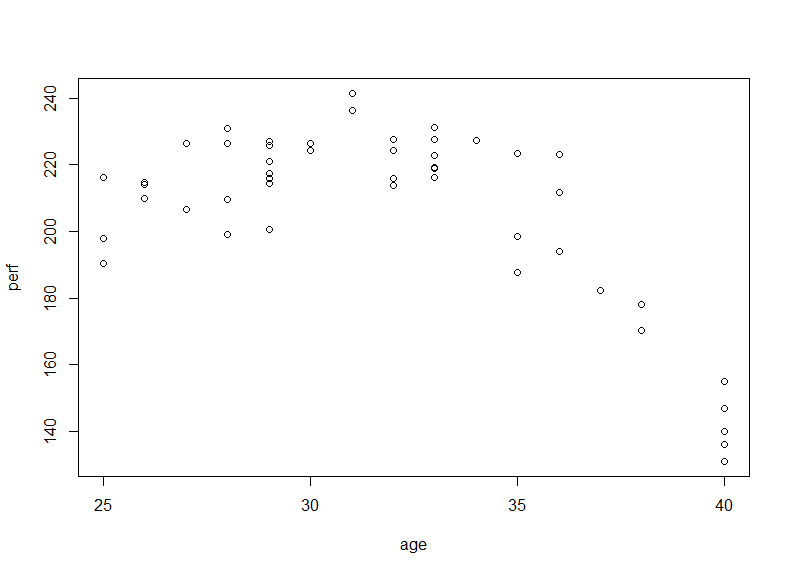 Computing the coefficients of correlation for the three types can be tedious (especially Kendall's). Below are computations in R statistical software for the data in the plot. [Pearsons's method is the default, so you need not use the argument method="pearson" if you want Pearson's correlation coefficient.]

If the association is predominantly linear, then it may be worthwhile to do a linear regression of performance on age. That might allow you to make a quantitative connection between the two variables. However, even if regression might permit you to predict performance of mathematicians (not included in your data) based on their ages, you should beware that even a strong correlation does not establish causation. The Wikipedia article has some remarks on that.