Why is the sum of probabilities in a continuous uniform distribution not infinity? 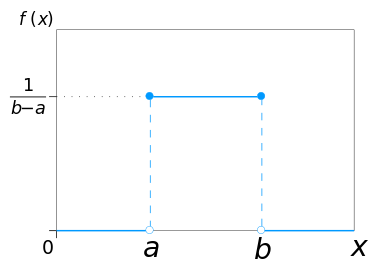 Formally, the above probability function (f(x)) can be defined as

Consider that I have to choose a real number between a (say, 2) and b (say, 6). This makes the uniform probability = 0.25. However, since there are an infinite number of numbers in that interval, shouldn't the sum of all the probabilities sum up to infinity? What am I overlooking?

Is f(x) not the probability of the number x occurring?

Because each term in the summation is weighted by the infinitesimal d$x$. The importance of this is probably most easily understood by carefully walking through a very basic example.

Consider using Riemann summation to compute the area under the following rectangular region (a rectangle was chosen to remove the approximation aspect of Riemann summation, which is not the focus here): 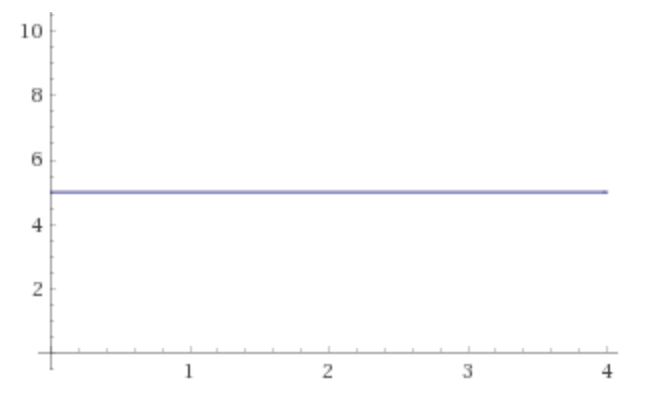 ] We can compute the area using 2 subregions, or by using 4 subregions. In the case of the 2 subregions (denoted $A_i$), the areas are given by $$A_1=A_2=5\times 2 = 10$$ whereas in the case of 4 subregions (denoted $B_i$), the areas are given by $$B_1=B_2=B_3=B_4=5\times 1 = 5$$ The total area in both cases correspond to $$\sum_{i=1}^2 A_i = \sum_{i=1}^4B_i = 20$$ Now, this is all fairly obvious, but it raises a subtly important question which is: why do these two answers agree? Intuitively it should be clear that it works because we've reduced the width of the second set of subregions. We could consider doing the same thing with 8 subregions each with a width of $0.5$, and again with 16... and we could continue this process until we have an infinite number of subregions, each with a tiny width of d$x$. As long as everything is always correctly weighted, the answers should always agree. Without the correct weighting, the summation would indeed simply be $\infty$.

This is why I always make sure to point out to students that an integral is not simply the symbol $\int$, but the pair of symbols $\int \text dx$.

i.e. you have a 10% chance of getting a result in that range.

[1]Sorry for all the people having heart attacks at my over-simplification of the calculation.

In general your reasoning fails in this assumption:

However, since there are an infinite number of numbers in that interval, shouldn't the sum of all the probabilities sum up to infinity?

It's a mathematical problem, known since the Zeno of Elea Paradoxes.

Two of his claims were that

Both of them were based on the claim that you can build an infinite sequence of positive numbers (in the former case by saying that an arrow has to fly infinitely times half of the remaining way to the target, in the latter by saying that Achilles has to reach position where the turtle was previously, and in the meantime the turtle moves to a new position that becomes our next reference base point).

Fast forward, this led to a discovery of infinite sums.

So in general sum of infinite many positive numbers does not necessarily have to be infinite; however, it may not be infinite only if (an extreme oversimplification, sorry about that) almost all of the numbers in the sequence are very close to 0, regardless how close to zero you request them to be.

Infinity plays even more tricks. The order in which you add elements of the sequence is important too and might lead to a situation that reordering gives different results!

Explore a bit more about paradoxes of infinity. You might be astonished.

Not the answer you're looking for? Browse other questions tagged probability distributions uniform-distribution or ask your own question.

181
Why do we need sigma-algebras to define probability spaces?

1
Adjusting Uniform Probability Distribution
0
Which curve to select for finding the CDF of a function of a continuous joint distribution?
1
Calculating probability of landing on an area of a distribution from any other area
2
How do I calculate the probability density function for a joint beta + uniform distribution?