Permutation test for difference in distributions in R

I was reading a paper that says they use an "ANOVA permutation test" to test if there is a difference in the (in-)degree distribution among groups of nodes in a network. I Googled this and found a resource (here) on how that works.

In the example in the resource, when they see a significant p-value in the independence_test, they follow up with a pairwisePermutationTest for multiple comparisons. Their results:

So they have a statistically significant p-value here, indicating (I think?) that there is at least one group median that is different from the other group medians.

They follow this up with a pairwise test to determine which medians are significantly different, and obtain these results:

This can, and does, happen surprisingly often (in my experience.) It comes about because, heuristically, "almost significant" coefficients are almost as unlikely to come about by chance as "significant" coefficients, so if you have a reasonably high percentage of them, it's very unlikely, in toto, that there's no effect anywhere; it's just hard to pinpoint where. So the omnibus test indicates significance, but none of the pairwise tests do.

To construct a concrete example, assume you have a model with two coefficients that are independent, and that the t-statistics for them are both equal to 1.8, with, say, 100 degrees of freedom (so we can work with Normal distributions with a reasonable degree of accuracy.) The probability that the sum of the squares of the two t-statistics exceeds 6.48 (=$2\cdot 1.8^2)$ is about 0.04 (under the null hypothesis), so, jointly, the two coefficients are significant at the 95% level of confidence, but obviously neither one is significant at the 95% level of confidence all on its own. The following graph illustrates this: 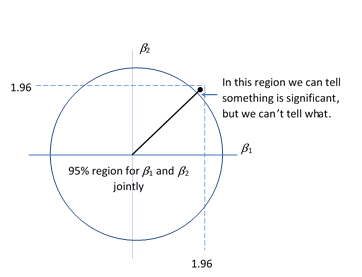 This may seem a rather unlikely scenario, but as the number of variables / coefficients increase, there is more opportunity for it to happen.

This topic is closely related to the multiple comparisons problem; for more, see Wikipedia.

Not the answer you're looking for? Browse other questions tagged permutation-test or ask your own question.