What is the intuition behind pooling frequencies that are less than five in a Chi-squared goodness of fit test?

Even though I have been told that it is not used in industries today, the concept is still taught at the undergraduate level. And is incorporated in every question and practical of goodness of fit test that we solve. However I have never come across any convincing explanation either intuitively or mathematically as to why we do so. Can you help me on this?

After reading @whuber's impressive and comprehensive link, it occurs to me that an explanation focused only on the issue of needing expected counts to be 5 or greater might be helpful to you.

Testing whether a Roulette wheel is fair. Suppose I'm used to betting on colors at US roulette. Out of 38 slots around the wheel there are 2 green, 18 red and 18 black. I'm suspicious that the wheel is biased so that the probabilities are not really 2/38, 18/38, and 18/38.

In practice, the distribution of $Q$ does not need to fit the chi-squared distribution throughout the support of $Q.$ We use only right-tail probabilities to find critical values and to decide whether P-values are small enough to reject the null hypothesis.

An experiment in which the statistic has chi-squared distribution. By contrast, if I decide to watch 100 spins of the wheel, then $E_1 = 11.11 > 5,$ so the guideline for $Q$ to be chi-squared distributed is met. In another simulation with a million 100-spin experiments the 95th percentile of the Q-values was 5.9914, which agrees with the value from $\mathsf{Chisq}(2)$ within simulation error.

Histograms from the two simulations are shown below, along with the density function of $\mathsf{Chisq}(2).$ It seems clear that, in the case with 20-spins and an expected count that is too small, the so-called chi-squared test statistic does not have a chi-squared distribution. 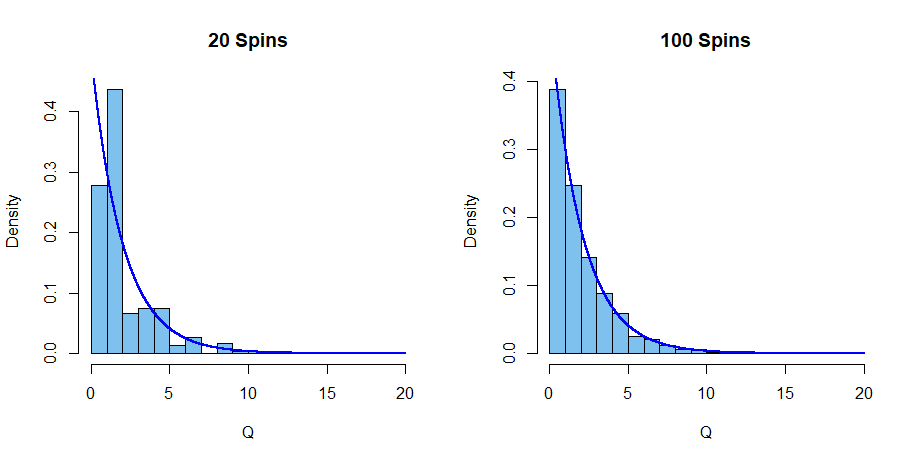 Note: In order to make a compact figure, both histograms were truncated at 20.

Not the answer you're looking for? Browse other questions tagged mathematical-statistics goodness-of-fit or ask your own question.

313
How to understand degrees of freedom?