Interpretation of conditional variance of estimator of intercept in linear regression

The intercept is the value the line takes for an input of $x=0$ (which is the dashed black line I added). If you were to sample new data from the same generating distribution, would it be easier for the red line or the blue line to have a more substantially different intercept? I think in this picture it's pretty easy to see that because the red points are so far away from the line $x=0$, even a small change can lead to the intercept moving by a lot, whereas for the blue points it would take a lot more change for the intercept to move by a lot. But the direction away from $\bar x = 0$ isn't important, so it makes sense that the variance would depend on $\bar x^2$ (plus then the units work too). 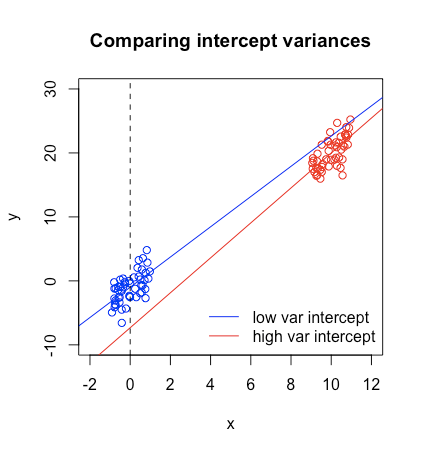 Not the answer you're looking for? Browse other questions tagged regression probability mathematical-statistics variance estimation or ask your own question.

86
Shape of confidence interval for predicted values in linear regression

6
Justifying the distribution for the maximum likelihood estimator in a linear regression example
49
Derive Variance of regression coefficient in simple linear regression
2
Covariance between OLS estimates in a non-standard linear model
1
How to show the least square estimator of $b$ has the minimum variance in the class $\sum a_iy_i$
2
Variance of an estimator?
4
Why is the unbiased sample variance estimator so ubiquitous in science?
0
Finding Variance for Simple Linear Regression Coefficients