Build a (normal?) distribution from $n$, quartiles and mean?

I have some data that is described by $n$, quartiles (+ additional quantile point) and the mean. Is it possible to rebuild or model this distribution from these statistics? As the median and the mean are not the same, there is at least some skew, but otherwise, I would assume the data to be normal like.

Edit: This was marked as a duplicate, but in the other questions I found while searching, none of them included the information regarding the mean as a data point to recreate the distribution. Because of that additional parameter, I wondered if it made the estimation possible. In short, the affect of having the mean was not apparent from the other answers related to the question.

The answer is No, not exactly anyhow.

However, sample quartiles are not population quartiles. There is not enough information in any normal sample precisely to determine $\mu$ and $\sigma.$

Based on @whuber's Comments about 'modeling', I gave some thought to relatively elementary methods that might be used to estimate the parameters of a normal distribution given the sample size, sample quartiles, and sample mean, assuming that data are normal.

Most of this will work better for very large $n.$ After some experimentation, I found that sample sizes around 35 are just large enough to get reasonably good results. All computations are done using R; seeds (based on current dates) are shown for simulations.

In the figure below, the blue curve is the estimated CDF; the solid red points show the sample values $Q_1, H, Q_3,$ and the red circle shows $A.$ The CDF of the true normal distribution is shown as a broken curve. It is no surprise that the three values $Q_1, Q_3,$ and $A$ used to estimate normal parameters fall near the estimated normal CDF. 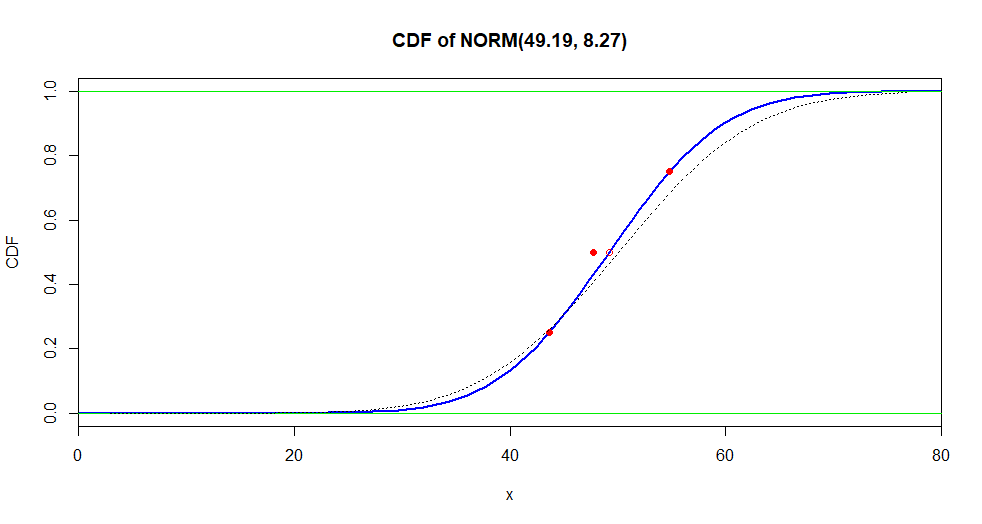 Thus there is no significant evidence of skewness in the comparison of the our sample mean and median. Of course, the Laplace and Cauchy families of distributions are also symmetrical, so this would hardly be "proof" that the sample is from a normal population.

It is possible to estimate the parameters based on this information, but to construct some (approximate) likelihood function based on the given information $n,Q_1, Q_3, \bar{X}_n$ do not see easy. In a way this is a followup on the answer by @BruceET, trying to formalize ideas in that answer.

But to extend this to a likelihood also using the mean, we need the joint distribution of $Q_1, Q_3, \bar{X}_n$ and that would probably have to be approximated in some way. That seems like a nice little project!

Other ideas to look into here is ABC (approximate bayesian computation) which seems a good fit to estimation based on (insufficient) summary statistics. Or maybe simulated maximum likelihood. I will come back here to look at that.

Not the answer you're looking for? Browse other questions tagged distributions normal-distribution estimation quantiles or ask your own question.

1
Dividing and forecasting a normal distribution
6
Robust parameter estimation for shifted log normal distribution
3
How to estimate a standardized mean difference from two samples' quartiles?
2
Generate data with skewed distribution and known percentiles, mean and median
1
Parametric Definition of Skewed Normal Distribution with Left and Right Percentile
1
Likelihood of (multivariate) normal distribution
2
How is that possible, that in R, SAS or other packages there are so many ways to calculate quantiles? Isn't median just median?