This process was repeated for about 1400 games, and the results are as follows: 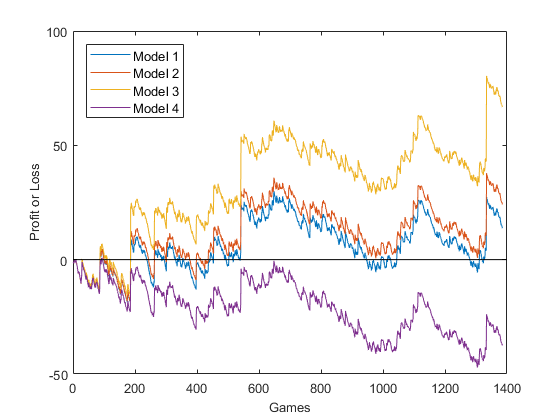 Having done that simulation, I'm unsure how to interpret the results and assess the models.

You should do a Bayesian regression but condition the coefficient around the stated odds to be 1. You know that the stated odds should be a scaling of the true odds. So $$O_{stated}\pi=O_{callibrated},$$ where $\pi$ is $(1+ \text{profit margin}),$ where $\pi>1$.

If you assume that the margin is constant, then this is a non-simple logistic regression. I say it is not simple because you have two restrictions.

First, your scaling coefficient is just your regression constant, but it is bound between zero and one. Second, your coefficient against your data has to be conditioned to unity. So, if you would think of this as $$Y=\beta_1O_{stated}+\beta_0,$$ it must be the case that $\beta_1=1$ and $\beta_0>0$. Since you believe the margin is around 5%, your prior expectation should be around $\beta_0\approx{\log(1.05)}$, where $Y$ is the binary for a win or loss.

If you relaxed these restrictions, it would imply that someone is using something other than well-callibrated odds. From the research on parimutuel betting, that would be a surprise. You could, then do a model selection process to see which method produced a more probable result.

You should be using a Bayesian logistic regression.

Not the answer you're looking for? Browse other questions tagged probability forecasting model-selection simulation model-comparison or ask your own question.