Understanding a derivation of bias correction for the Adam optimizer

I'm reading paper about the Adam optimizer and went up until the bias-correction section; in the paper they estimate the bias of the moving average of the squared gradient. These are the equations they use: 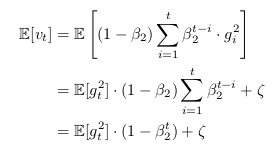 I don't understand how they make any of these transitions from the first row to the second and on to the third one. Could someone explain what rules are allowing them to do so ?

I don't think the authors do a thorough job of defining everything in their equations explicitly. I'm not sure about the first equality, but as far as I can tell, $\zeta$ is an error term from approximating the gradient's previous values, $g_{i}^{2}$ for $1 \leq i \leq t$, by the most recent value $g_{t}^{2}$. This allows you to move $g_{t}^{2}$ outside of the sum since it no longer depends on $i$, and as all the terms involving $\beta_{i}$ are constant, they can be taken outside of the expectation since they are nonrandom by the linearity of expectation. This is hinted at by the statement following the equations - "where ζ = 0 if the true second moment $E[g_{i}^{2}]$ is stationary." If the second moment is stationary, it is constant at each time step, and so the error is $0$ in making this approximation. That gets you from the first to the second line.

Going from the second to the third line is a more straightforward application of the formula for the sum of a finite geometric series:

Not the answer you're looking for? Browse other questions tagged optimization bias moving-average bias-correction adam or ask your own question.

1
What is the correct equation of AdaGard one should use if one aims to use AdaGrad in practice as the automatic way to choose the step size?
46
How does the Adam method of stochastic gradient descent work?
3
Bias Correction for Estimator with known bias
15
Why is it important to include a bias correction term for the Adam optimizer for Deep Learning?
1
Convergence proof of ADAM optimizer