Given a convex cost function, using SGD for optimization, we will have a gradient (vector) at a certain point during the optimization process.

My question is, given the point on the convex, does the gradient only point at the direction at which the function increase/decrease fastest, or the gradient always points at the optimal/extreme point of the cost function?

The former is a local concept, the latter is a global concept.

SGD can eventually converge to the extreme value of the cost function. I'm wondering about the difference between the direction of the gradient given an arbitrary point on the convex and the direction pointing at the global extreme value.

The gradient's direction should be the direction at which the function increase/decrease fastest on that point, right?

They say an image is worth more than a thousand words. In the following example (courtesy of MS Paint, a handy tool for amateur and professional statisticians both) you can see a convex function surface and a point where the direction of the steepest descent clearly differs from the direction towards the optimum.

On a serious note: There are far superior answers in this thread that also deserve an upvote.

An intuitive view is to imagine a path of descent that is a curved path. See for instance the examples below.

As an analogy: Imagine I blindfold you and put you somewhere on a mountain with the task to walk back to the extreme (low) point. On the hill, if you only have local information, then you are not knowing in which direction the bottom of the lake will be.

If you can assume convexity 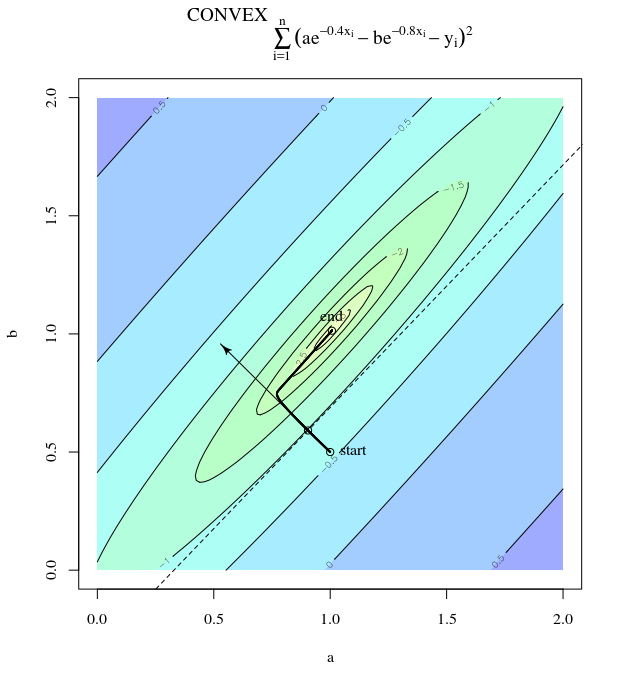 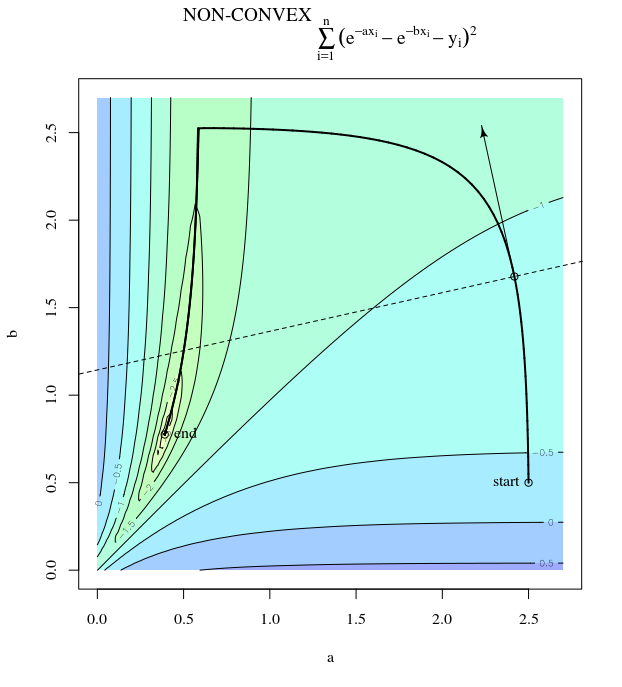 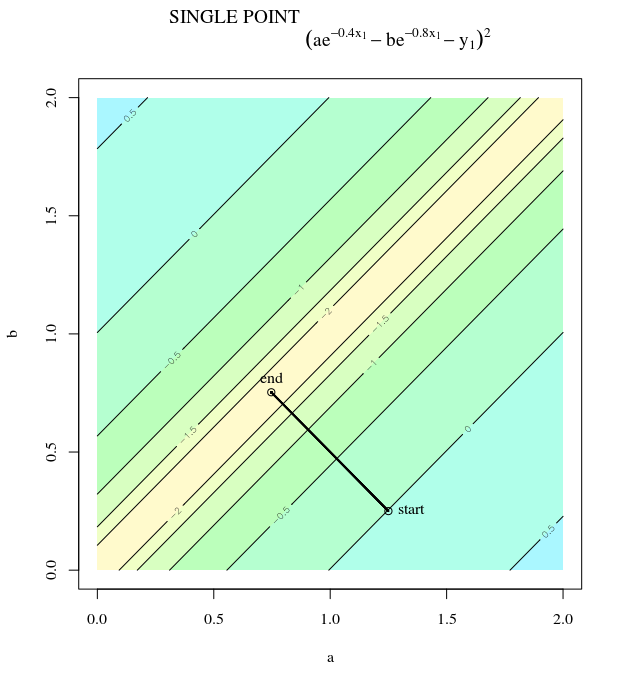 Below is another view for four data points. Each of the four images shows the surface for a different single point. Each step a different point is chosen along which the gradient is computed. This makes that there are only four directions along which a step is made, but the stepsizes decrease when we get closer to the solution. 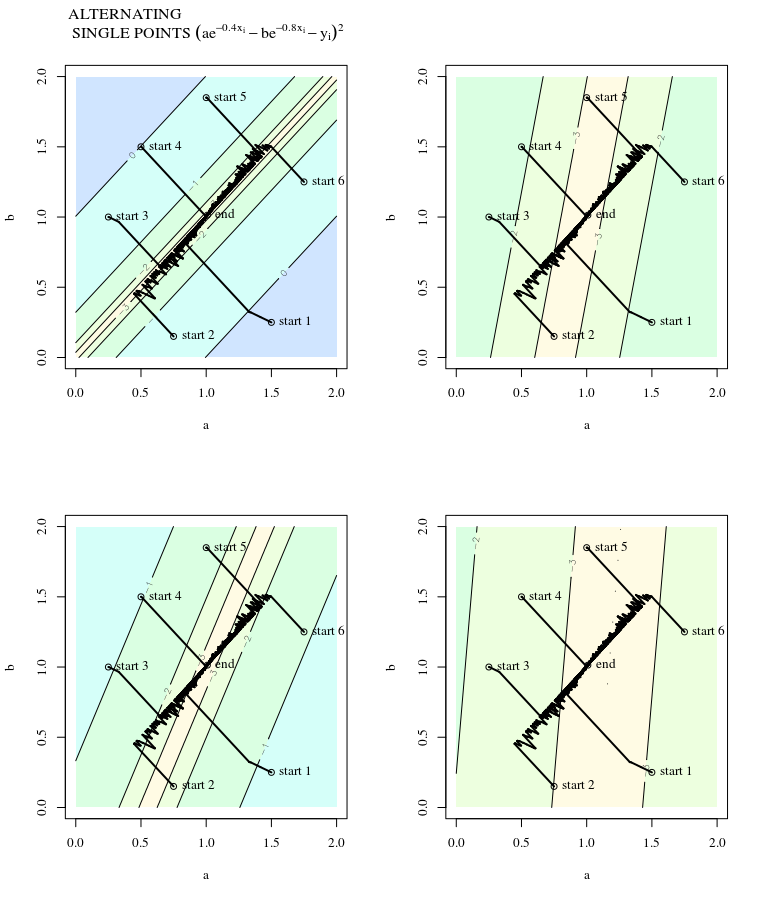 The above images are for 4 datapoints generated by the function:

Steepest descent can be inefficient even if the objective function is strongly convex.

I mean "inefficient" in the sense that steepest descent can take steps that oscillate wildly away from the optimum, even if the function is strongly convex or even quadratic. 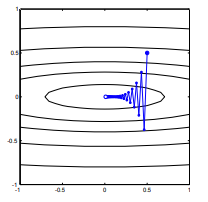 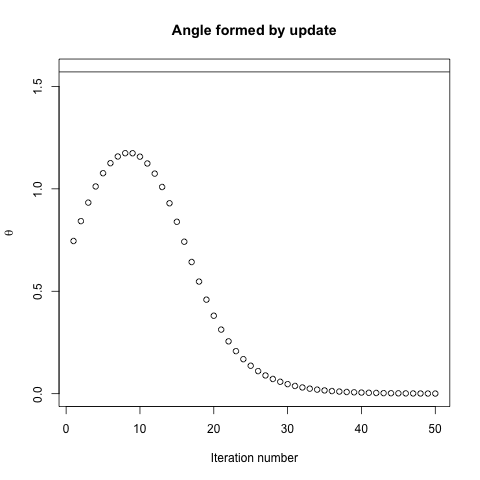 SGD has the same properties, with the exception that the updates are noisy, implying that the contour surface looks different from one iteration to the next, and therefore the gradients are also different. This implies that the angle between the direction of the gradient step and the optimum will also have noise - just imagine the same plots with some jitter.

The other answers highlight some annoying rate-of-convergence issues for GD/SGD, but your comment "SGD can eventually converge..." isn't always correct (ignoring pedantic usage remarks about the word "can" since it seems you meant "will").

One nice trick for finding counter-examples with SGD is to notice that if every data point is the same, your cost function is deterministic. Imagine the extremely pathological example where we have one data point $$(x_0,y_0)=(1,0)$$ and we have a model for how our system should work based on a single parameter $\alpha$ $$f(x,\alpha)=\sqrt{\alpha^2-\alpha x}.$$

I'm not sure if convexity is enough to break some worse behavior that exists for general SGD, but if you allow functions even as complex as cubics for your cost function then SGD can bounce around on a dense subset of the domain and never converge anywhere or approach any cycle.

SGD can also approach/obtain cycles of any finite length, diverge toward $\infty$, oscillate toward $\pm\infty$ (excuse the notation), and have tons of other pathological behavior.

One interesting thing about the whole situation is that there exist uncountably many functions (like SGD) which take arbitrary convex functions as inputs and then output an update rule which always quickly converges to the global minimum (if one exists). Even though conceptually there exist loads of them, our best attempts at convex optimization all have pathological counterexamples. Somehow the idea of a simple/intuitive/performant update rule runs counter to the idea of a provably correct update rule.

Maybe the answers to this question need a quick update. It seems like SGD yields a global minimum also in the non-convex case (convex is just a special case of that):

The authors establish the convergence of SGD to a global minimum for nonconvex optimization problems that are commonly encountered in neural network training. The argument exploits the following two important properties: 1) the training loss can achieve zero value (approximately); 2) SGD follows a star-convex path. In such a context, although SGD has long been considered as a randomized algorithm, the paper reveals that it converges in an intrinsically deterministic manner to a global minimum.

This should be taken with a grain of salt though. The paper is still under review.

The notion of star-convex path gives a hint about towards where the gradient would point at each iteration.

Not the answer you're looking for? Browse other questions tagged neural-networks optimization gradient-descent stochastic-gradient-descent convex or ask your own question.

1
How does Feature Scaling help Gradient Descent?
23
Why are second-order derivatives useful in convex optimization?
6
How can change in cost function be positive?
9
How to deal with unstable estimates during curve fitting?
7
Is there any paper which summarizes the mathematical foundation of deep learning?
4
Basic preconditioned gradient descent example
3
Problems, which are difficult for SGD
0
Is there a reason we need to make a logistic regression linear using the logit?
1
Can we apply analyticity of a neural network to improve upon gradient descent?
2
Gradient Descent Rule in feedforward ANN
See more linked questions