Why with two classes, LDA gives only one dimension?

I am working with dimensionality reduction algorithms. Linear Discriminant Analysis (LDA) is a supervised algorithm that takes into account the class label (which is not the case of PCA for example). I am using Python to do a comparative study between some algorithms.

Why with two classes (k = 2), regardless of the data dimensionality, LDA gives one dimension, i.e. the new subspace is composed of only one dimension? For example if I try to project my dataset (of 100 attributes and 2 classes) to 10-dimensional space by using LDA(n_components=10) I only obtain 1 dimension?

For k>2 I can obtain the number of discriminant vectors that I specified as n_components. How can I get n_components dimensions for k=2?

Like @amoeba, I don't understand your difference between Q1 and Q2: in any case, LDA obtains at most $k-1$ dimensions. For $k=2$ that's one dimension, for $k=8$ it would be 7. And of course, if the input space has lower dimensionality that that's the limiting factor.

One idea/heuristic behind LDA is that separating classes is easy if they are all spheres of the same size: all you then need is distance to the class means. Alternatively, you can say that the connection between class means are normal vectors for suitable separation planes.
In that narrative, you can look at LDA as a projection that in the first place does singular value decomposition (i.e. something very similar to PCA) of the pooled covariance matrix in order to get a space with such spherical classes. Let's call this our primary score space.

(At this point, we could derive other classification algorithms that use the SVD projection as heuristic but don't exploit/rely on the assumed unit-sized spherical shape of the classes.)

Now, as we have unit-spherical class shapes, the only thing remaining to care about are the class means. I.e., $k$ points. Even if our primary score space has higher dimensionality, the $k$ points will form a $k-1$ dimensional shape (simplex). Thus without loss of anything, we can further rotate our primary score space so that our $k-1$-simplex of class means lies in the first $k-1$ dimensions.
For the postulted spherical classes, all further dimensions cannot not help with the distinction: the classes have exactly the same size and position in these further dimensions. Thus, we throw them away.

(Again, you may derive another classifier that uses the first two projection steps but then keeps [some of] those further dimensions as the classes in practice may not be spherical.)

One classifer to look into when comparing LDA and PCA is SIMCA which can be seen as a one-class classifier analogous to LDA.

For our description of LDA, the $k-1$ dimensions we keep would be the in-model space, whereas the remaining dimensions are the out-of-model space. Interpretation will be slightly different compared to SIMCA, but you should have a start for your thoughts with this.

discriminant_analysis.LinearDiscriminantAnalysis can be used to perform supervised dimensionality reduction, by projecting the input data to a linear subspace consisting of the directions which maximize the separation between classes (in a precise sense discussed in the mathematics section below). The dimension of the output is necessarily less than the number of classes, so this is, in general, a rather strong dimensionality reduction, and only makes sense in a multiclass setting. 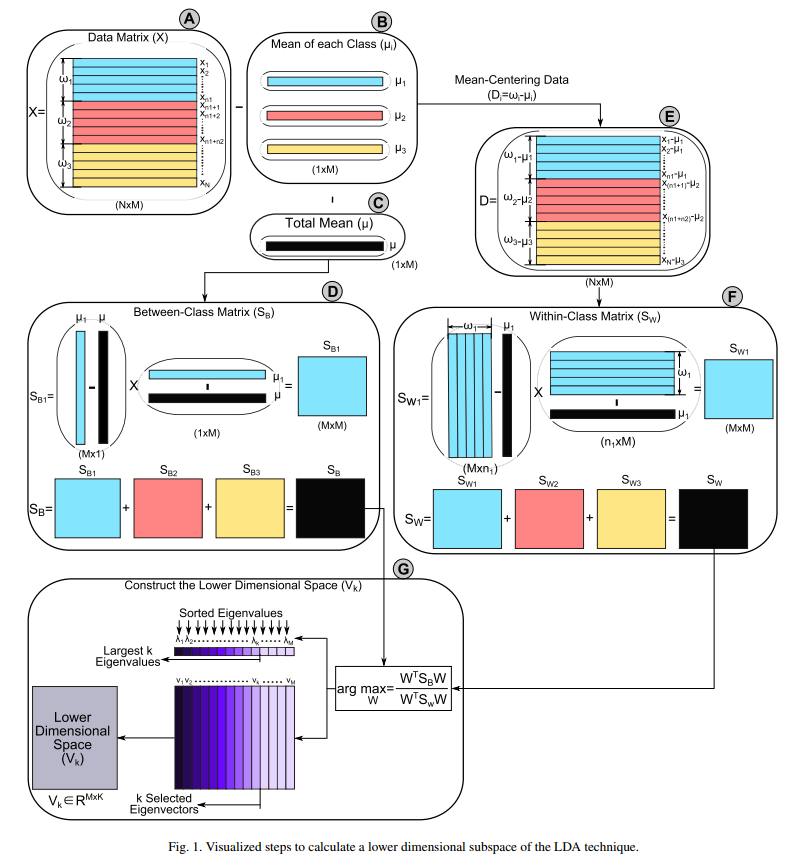 4
Usage of LDA with more than two classes
13
Bayesian and Fisher's approaches to linear discriminant analysis
32
Does it make sense to combine PCA and LDA?
1
Alternatives for PCA for dimensionality reduction before classification
1
Why is the number of components in Linear Discriminant Analysis bounded by the number of classes?
6
one example of LDA and max number of features
0
PCA and LDA segregate the classes perfectly in 3 dimensions
2
Factor analysis and Dimensional Reduction difference