I have two binomial (success=1 and failure=0) datasets and intend to apply a statistical test to show whether they are statistically equivalence or not. First dataset (x) includes around 164 data points in which 58 of them are "1" and the rest are "0". The second dataset/group (y) consists of 280 data points in which 113 of the are "1" and the rest are "0". I applied the following test in r:

And I got the following results:

Regardless of the epsilon value (which is somehow high! and shows the difference between the mean of two population), I think this function is for another type of data, Not binomial data. Does anyone know, Is this the right function to test the equivalency and if not, is there any other test which is appropriate for Binomial data?

I also applied the following test as @user2974951 suggested:

And I got these results which I can not interpret:

E.g. you might want to work with odds-ratios and might think that anything within a factor of 0.8 to 1.25 (equal delta in both directions on the log-odds-ratio scale) is not a meaningful difference. You could then use logistic regression to get and estimated odds ratio (0.809 for group 1 vs. 2) and to get 95% asymptotic Wald confidence intervals (0.542 to 1.206). Since the confidence interval is not completely within 0.8 to 1.25 (i.e. the lower end falls out of it), you would not have shown equivalence (i.e. you cannot reject the null hypothesis of non-equivalence). With other equivalence margins, you might have equivalence.

Often we can also derive a p-value for the decision, but if all you want is "reject null hypothesis" vs. "null hypothesis not rejected", then all you need is confidence interval. When asymptotics apply, you can use the normal approximation to get such a p-value (essentially looking at what level confidence interval would just overlap with the margin, which is easy to do, if the CI is formed via estimated log-odds ratio +- SE * appropriate percentile of the normal distribution such as 1.96), while with more sparse data this can be a bit difficult.

You could of course also decide that you are not interested in an odds ratio and want a risk difference or a risk ratio.

Looking at confidence intervals. If you need additional analyses to be satisfied that there is no significant difference, I suggest you look at Agresti-Coull CI's for the two population proportions. [This slight modification of the traditional confidence interval, has been shown to have better coverage probability.]

Power analysis. In order to get a test that can successfully distinguish between population probabilities $.35$ and $.40$ about $n=2000$ observations on each are required, as the following power analysis from Minitab shows. 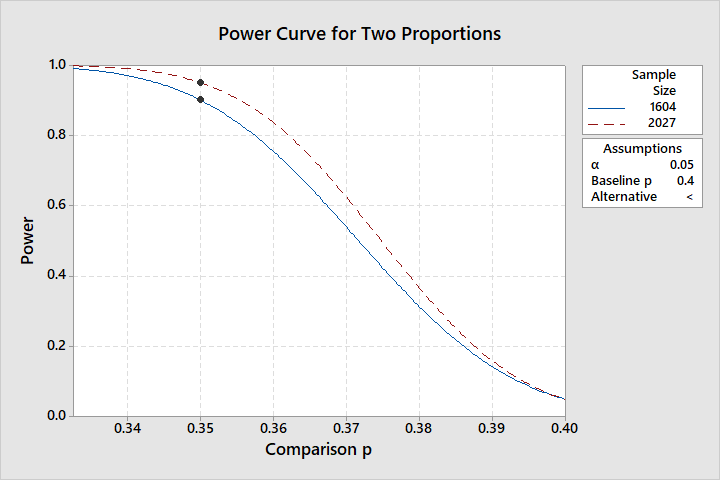 In public opinion polling to predict an election, where two candidates may each have about half of the vote, one must interview about $2500$ subjects to predict individual candidates' support within $\pm 0.02;$ about $1100$ for $\pm 0.03.$

Not the answer you're looking for? Browse other questions tagged hypothesis-testing statistical-significance equivalence or ask your own question.

8
Intuitive explanation of differences between TOST and UMP tests for equivalence
1
how to analyze the results for this binomial test?
2
Alternative model to binomial
5
Equivalence test for binominal data
1
Likelihood ratio for binomial
3
Normality Test: Statistical Normality Test vs Visual Normality Checks