Collinear independent variables can have undesirable effects on the interpretation of coefficients in a linear model. Indeed, for two perfectly-correlated predictors, the coefficients are not uniquely determined, leaving a single degree of freedom by which they may vary.

However, adding in even a little bit of randomness gives solutions to the OLS equations that are not too far from assigning the correlated independent variables equal weight. 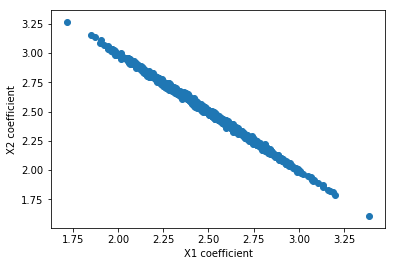 Why am I relatively unlikely to get, say, an X1 coefficient of -105 and an X2 coefficient of 110? Those add up to 5, but there is something pushing the results toward 2.5, 2.5. What is the intuition behind this phenomenon, and what practical implications does this have when faced with collinear independent variables? 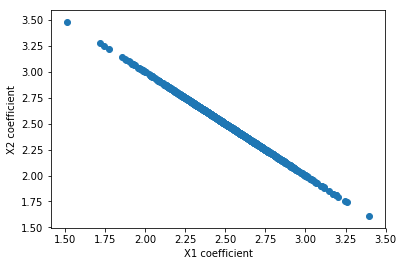 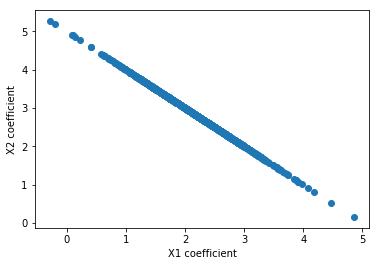 Interest in how the amount of added noise plays into this phenomenon encouraged me to make the following graph. I ran the above experiment for various quantities of added noise, from $2^{1}$ to $2^{-60}$ on an exponential scale. I then measured the std of the X1 coefficient in the above experiment for each of those trials. Results are given here (should read $-\log_2$ on the x-axis): 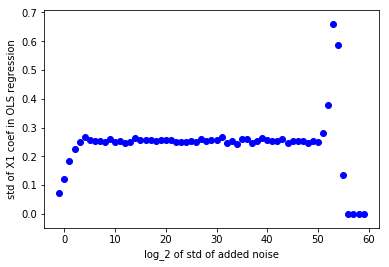 I suspect that at very very small values of added noise, there are numerical problems due to limits of the computer architecture. Accounting for that, it seems from this graph that the distribution of OLS coefficients for X1 and X2 converges to a Gaussian distribution with mean 2.5 and std 0.25 or so. Thus, this seems like "Why not coefficients (-105,110)?" is still open.

Zooming in on the weird behavior for very small values: 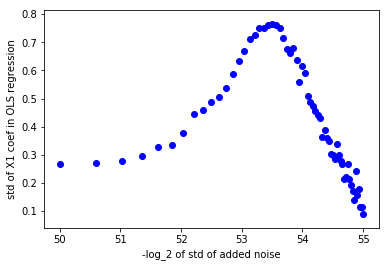 Which seems like it's doing a sane thing. That doesn't mean that it's not floating-point errors, but it's not clear that that is what's happening.

So in the case of -105 and 110 you would get larger contributions from the error terms, which only gets 'undone' when there is an a strong correlation in the particular sample of the error terms. 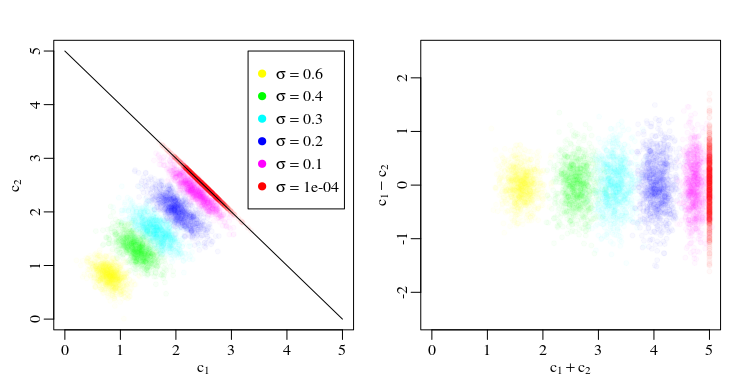 This is for thousand repetitions of the data:

In the way you've added noise, you could write $x' = x +\epsilon$ (where $\epsilon$ is a normally distributed variable representing noise). Furthermore, $y=5x+4+\eta$, where $\eta$ is another Gaussian noise term.

You are trying to fit a regression of the form $Ax + Bx' +C$, and you know that you're fitting it to a target variable which was generated by $y=5x+4+\eta$, thus :

Hopefully, this sheds some light on what's happening (together with your numerics), even if it doesn't formally show it. If $\epsilon$ is so small that $B\epsilon$ is also very small, then pretty much any combination of (A,B) which satisfies $A+B=5$ will likely be a good fit, and which one is best is a question of noise. The large $\epsilon$ is, the more $B\epsilon$ will in general make the LHS fluctuate wrt to the RHS and the more B will go to zero ( a trivial restatement of the fact that x is the truly explanatory variable and B is only correlated, and as you shrink that correlation, the regression will find it easier to learn this)

It's less clear to me what happens when $\epsilon$ and $\eta$ are of similar sizes. In general there will be competing effects where you might be able to match the data better with non-zero B. What happens if you simulate a larger data set? Does the effect still hold?