Including covariates in a mixed model (lmer)

I would like to know if there is a significant effect of condition on Score1, and how closely correlated Score2 is at approximating Score1, for the following dataset: 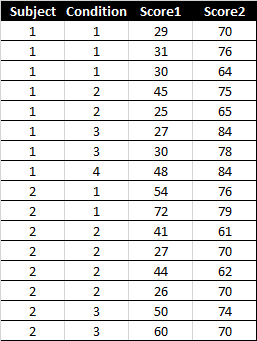 I am using a random intercept with random slopes model in R: data1.model=lmer(Score1 ~ Condition+(1+Condition|Subject), data=data1,REML=FALSE)

Score2 is an indirect measure of Score1, in this type of experiment, Score2 is often the only available measurement and thus it is used as an approximation of Score1. However, in this experiment we have been able to measure both variables. So my question is, how effective is Score2 at approximating Score1? I think I am looking for the amount of variance in Score2 that can be explained by Score1.

However, I think a mixed model may offer more flexibility as I have a third variable (Score3) influencing the Score2 measurement and I would like to find the amount of variance in Score2 that can be explained by Score1, while controlling for the third variable (which is also measured at each trial).

Any direction on this problem would be much appreciated!

If you're interested in the agreement between two continuous variables, you could use the Bland-and-Altman Plot that lets you investigate how well the two Scores agree, and whether the differences between them are affected by the level (average) of the score (e.g., that the agreement is better for low scores than for high scores). You could also do it differently per condition.

The fact that you have repeated measurements means that you will need to calculate the limits of agreements based on the results of a mixed models analysis of the differences between the two scores in which you include as a fixed effect the average of the two scores.

Not the answer you're looking for? Browse other questions tagged mixed-model lme4-nlme repeated-measures or ask your own question.