The issue is that I don't know either of those probabilities. I am not sure where to go from here.

Bayes's Theorem can be unintuitive, I would suggest trying the problem using a tree diagram. Here I have made the tree for the problem at hand: 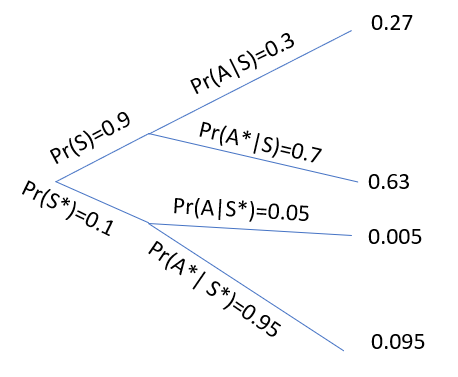 The numerator is spelled out in the questions

Now the tricky part is getting $P(A)$. There are two ways a student can get an A, and so we sum the corresponding probabilities of each to get

Reinserting into Bayes' Theorem, we arrive at

In this way we arrive at the same result as compared to looking at the tree.

Not the answer you're looking for? Browse other questions tagged probability self-study conditional-probability or ask your own question.