what type of sample is this?

I have the folowing table: 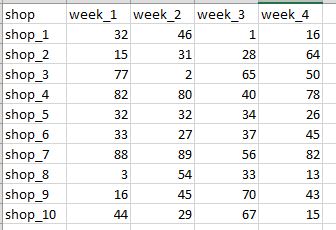 according to this example, there are 40 observations distributed over 10 stores and 4 weeks of the month. Objective: to make a sample of 90%, 80%, 75% and 50% of the 40 observations so that: 1) as a result, all the stores were covered by the sample 2) as a result, all the weeks were covered by the sample. I'd call it a two-dimensional stratified sample, but I don't know what it's called.

Since you did not provide the data we will have to do this abstractly. We are talking about stratified sampling so you need to make sure that every cell gets the appropriate ratio of samples. Multiply each cell by 0.9 (for the first subsample) to get the number of samples that you need from each cell (plus minus rounding error). Then simply select 90 % of random samples from each cell. Together you will have roughly 90 % of observations from your original sample, for all shops and weeks.

Not the answer you're looking for? Browse other questions tagged sampling terminology stratification or ask your own question.

4
How to efficiently expand a simple random sample after population growth?
7
Is stratified meta-analysis more or less objective than meta-regression?
1
What do you call this technique?
2
Small Random Samples vs one Random Sample (Stratified)
0
How to perform inference on stratified sampling data