I have a doubt in basic hypothesis testing. Suppose I have a testing setup as below. I have assumed null hypothesis that my sampling distribution has $\mu = 60$, and I get a sample set with sample mean at $\overline{x} = 62.75$ 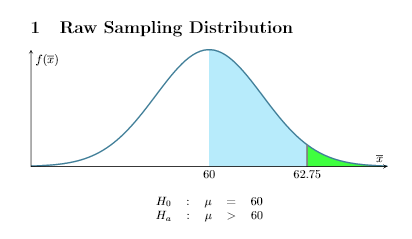 Now to evaluate my hypothesis, if discrete distribution, I would simply look up at $p(\overline{X} = 62.75)$ and if that is less than $\alpha$ we reject null or otherwise.

I am not able to justify why we leave the whole blue area. I understand my alternate hypothesis is $\mu > 60$, but not $\mu > 62.75$ or something like that. So its confusing.

Browse other questions tagged hypothesis-testing normal-distribution sampling or ask your own question.