GAM interaction- how to interpret 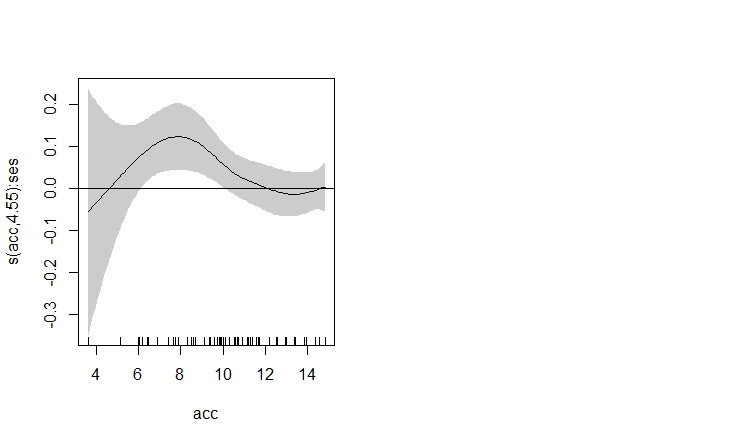 I am interested in the interaction between s(acc) and the parametric continuous variable ses. I obtained this graph but I am not sure how to interpret the relation.

I guess I am not sure how to interpret the effect of the interaction between s(acc) and ses on the DV - I am confused by the centering based on zero so I am not sure what it means when the values along the y axis get higher or lower than 0, especially in the context of a negative binomial model.

Also, could anyone recommend some books so I can learn about interactions with splines in GAM models?

In a linear model, say

the effect of $\mathbf{x}_1$ on the response is constant. If we add $\mathbf{x}_2$ to the model and an interaction between both covariates

The same intuition guides the interpretation of a varying coefficient model such as the one you fitted. The key difference is that now we are thinking about how the magnitude of linear effect of $\mathbf{x}_1$ depends smoothly on $\mathbf{x}_2$.

As this is a Negative Binomial model, all of the above effects are on the log scale. You would need to exponentiate the values on the y-axis to see the (now multiplicative) effect of $\text{ses}$ on the response. To guide this however, $\exp(0) = 1$, so the zero line in the plot indicates no effect or change in response on the log scale and on the response scale it also means no effect because the interpretation there is that we multiply values by $\exp(0) = 1$.

If you want to really dig into this visually, do as @AndrewM suggests, and create a new data frame with all the covariates except acc held at their mean or median values and vary acc over it's range. If you predict from the model passing this new data set as newdata you can explore the predicted values on the response scale (using type = "response") as you vary acc. I would do this for a few values of sec so you can see how the two variables interact.

Not the answer you're looking for? Browse other questions tagged interaction gam splines or ask your own question.

4
Negative binomial GLM with 2 factor variables: adding interaction completely changes effect of factor levels
4
GAM (mgcv): AIC vs Deviance Explained
6
Clarification on how to perform nested cross-validation
1
3-way ANOVA with a significant 2-way interaction. What are my next steps?
8
Different ways of modelling interactions between continuous and categorical predictors in GAM
1
For non-parametric regression which one has better interpretation and properties, GAM or quantile regression?