Prioritized Replay: How does the rank-based prioritization work out?

In the paper Prioritized Experience Replay, the authors introduced a rank-based way to compute the priority of a transition. They said:

For the rank-based variant, we can approximate the cumulative density function with a piecewise linear function with $k$ segments of equal probability. The segment boundaries can be precomputed (they change only when $N$ or $α$ change).

I don't very understand what they were trying to convey in this sentence: where does the cumulative density function come from?

I have a simple thought about the rank-based implementation based on what I can extract from the paper-- not so sure if it approaches what the authors talked about.

We set the range of a segment in inverse proportion to the priorities of transitions in it. For example, if one segment has the average priority of $p$ and another has $2p$, then the range of the first is two times more than that of the second.

There is an obvious deficiency in this method: I just assumed the priorities are uniformly distributed, things will be more tricky if they're not. For now, however, I cannot get any further.

deep-learning reinforcement-learning
Share
Improve this question
edited May 5 '19 at 12:16

I'm surprised that the words "cumulative density function" made it into this paper. They don't mean anything. I think they probably meant "probability mass function" (PMF).

This is actually the zipf distribution. Be careful not to confuse this with the zeta distribution. The distinction is actually very important. We have a finite number of samples in the replay buffer, so the restricted support of $i=1,\dots,N$ is appropriate. Also, $\alpha$ is not restricted to values less than 1. 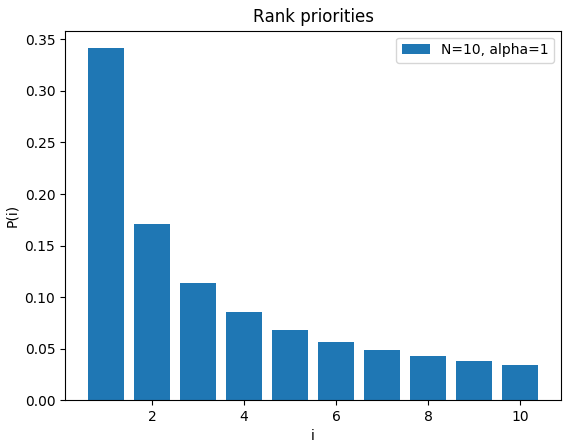 In order to sample from (approximately) this distribution, the authors suggested finding ranges of $i$ such that the sum of $P(i)$ over each of these ranges is equal. By uniformly sampling the range and then uniformly sampling $i$ from within that range, you can approximate sampling from $P(i)$.

15
Why is deep reinforcement learning unstable?
2
How does backpropagation work in the case of reinforcement learning for games?
2
Filling replay memory randomly at the beginning or not?
2
Why does Hindsight experience replay help addressing the problem of sparse rewards?
3
Is experience replay taking individual memory samples out of context?
2
In a DQN, can Prioritized Experience Replay actually perform worse than a regular Experience Replay?