I have this model I want to run that has no main treatment effect because I subsetted the data just to look at this one treatment (For example I have 1200 points from three treatments: control, shelter and water, and this is only shelter).

It doesn't matter what I do, if I put more than five covariates the following covariates are always deemed singular

I am wondering how I can see the effect of covariates if I have no main treatment for all covariates? I have already run a Pearson's correlation to reduce colinearity - but either way I can't put in over. I read that was because these later variables that are deemed singular have no effect - but that can't be true because if I run them by themselves they work and are significant 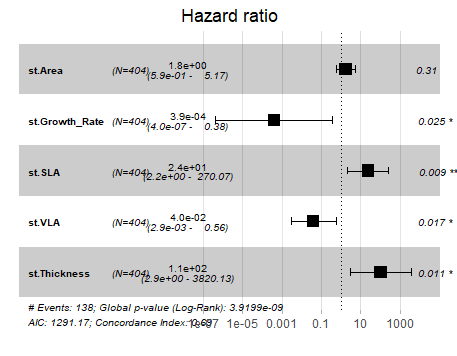 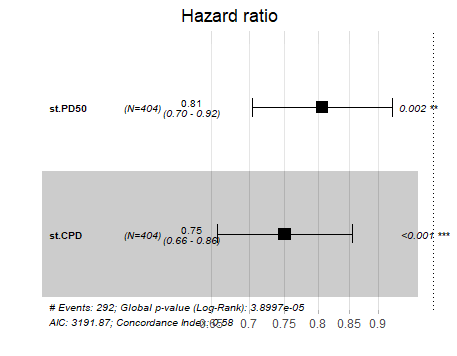 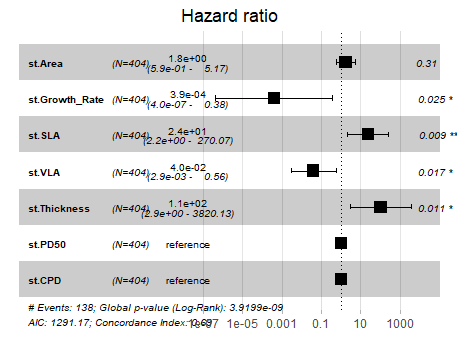 You can see what I mean with the plots above

The dataset is below but it exceeded the character limit so I uploaded it to this link: dataset

Here is the Pearson's Correlation Output: 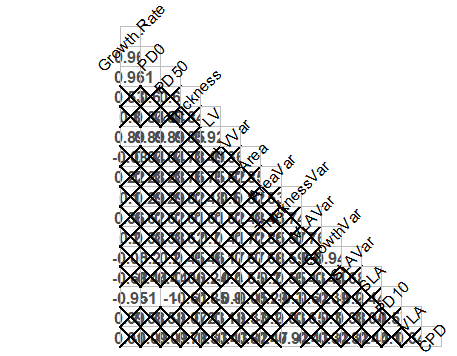 Although you have 404 rows in your data set and 199 rows in the complete-case subset that would be used in the call to coxph() that you show, you only effectively have 6 different datapoints.

There are only 6 different values for st.Area in the subset of rows that coxph() will be able to use. Furthermore, for each of those 6 values for st.Area each of the other variables (st.Growth_Rate, st.SLA, st.VLA, st.Thickness, and st.PD10) has the same value. For example, here's a selection of half a dozen lines:

So when you try to model with 6 predictors you are functionally overdetermined and coxph() can't give you a 6th independent coefficient. I suspect that a similar problem affects all of your other attempts.

This type of highly repetitious data and the large number of missing values are troubling. Step back a bit to think about your experimental design and what you are trying to accomplish. Perhaps ask a different question that goes back to the hypothesis you are trying to test and how best to analyze your original data (before your standardizations and all that) to test it.

Not the answer you're looking for? Browse other questions tagged r survival cox-model proportional-hazards or ask your own question.