What does "middle of the data" really mean?

And what about regression in general? Linear regression fits a line to the "middle" of your data.. but can that also be thought of as an average?

Yes, LOWESS is essentially "an average" but do note that effectively all regression algorithms return a conditional mean of the form $E(Y |X = x)$. To be clear on this: LOWESS does not test the hypothesis that something increases or decreases over time. We can plot our denoised data (using LOWESS) and make certain assertions but that sits mostly on the realm of Explanatory Data Analysis rather than formal hypothesis testing. (We should not underestimate the utility of EDA, just we must be careful not to overstate our findings.)

A bit more precisely now, a locally weighted regression model (LOWESS), is a series of polynomial regressions that models the data in small neighbourhoods. Conceptually the results are akin to a moving average. In particular, to get $E(Y|X=x)$ we use the data having $X$ values within a predefined neighbourhood/interval/span around $x$. We then fit a weighted polynomial regression to these points and our fitted value from this regression model is our estimates for $x$. It is worth noting that we can get predictions intervals.

Having mentioned the above and focusing on each of your side question in particular:

To close this: Getting the prediction intervals is relatively straightforward. Our only strong assumption is that the error in our sources of noise is uncorrelated. That allows us to add the standard errors associated with each point (se.fit) with the overall estimate of the noise level (residual.scale). 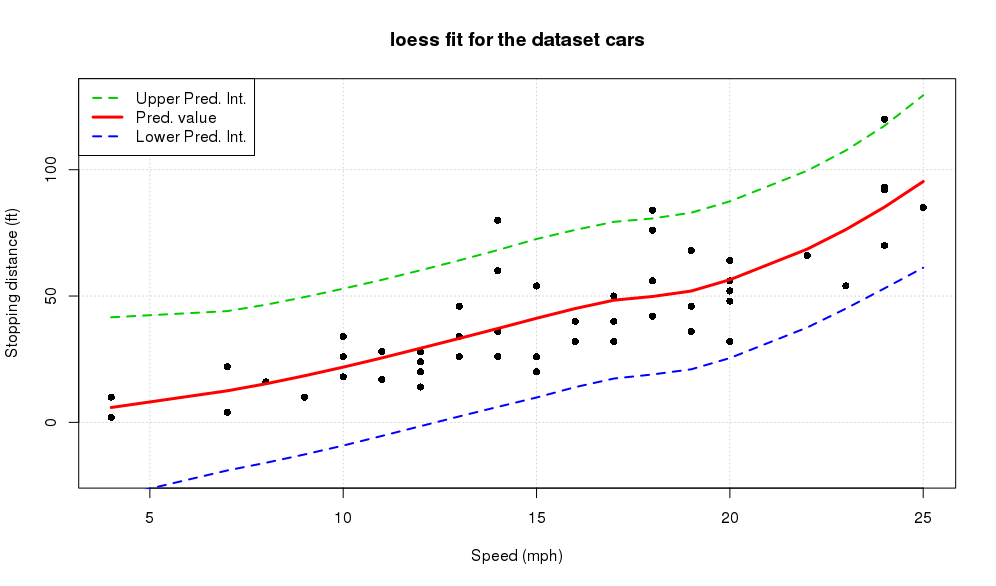 Not the answer you're looking for? Browse other questions tagged regression mean smoothing or ask your own question.

39
Difference between LOESS and LOWESS
20
Should the mean be used when data are skewed?

2
Smoothing algorithm for saturating function
1
What does monotone polynomial plot represent?
3
Behaviour of neighbouring points in LOESS smoothing when data is not uniformly distributed
4
Fitting a smoothed curve to a noisy data
1
What do the outputs of the function dlmSmooth from R's dlm package mean?
2
How should I understand smoothing in functional data analysis from a modelling perspective (specifically for temperature data)?
1
Regression model for growth with an upper limit