Are measures of association, relationship and correlation the same? Different textbooks uses those words interchangeably and Im wondering if the they are the simply the same...

They may sometimes be used as if they mean the same thing but correlation is more specific, and association is more general, with relationship being between the two.

A relationship suggests that as one variable changes the other tends to change as well. For example, two variables may have a quadratic relationship. This may occur with correlation or variables may be related but uncorrelated. That is, unless accompanied by some qualifying term, I tend to interpret "relationship" to essentially imply "functional relationship". However the word "relation" in the mathematical sense is more general and many people often use it more broadly without qualifying it. For example, imagine points scattered about a set of concentric ring-shapes. I probably wouldn't say that the variables were related (at least not without adding something to say that they weren't functionally related) but some people would happily do so.

Association may be more general still; (to me at least) it suggests almost any form of dependence between the variables. For example, imagine two variables where all the points tend to lay within small discs of probability (and not outside them), but where these discs are scattered about in a way that looks random. Then I would usually avoid the term "relationship" (qualified or not) and stick to associated or dependent. 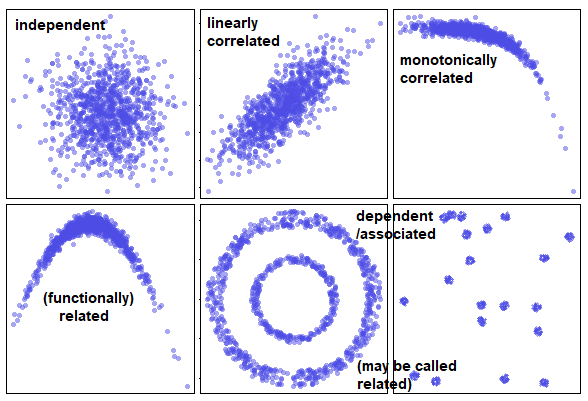 Further example: If you look at this image (from the Wikipedia article on Correlation and dependence; the first row displays different amounts of linear correlation, while the last row shows variables that are uncorrelated but dependent. With the the first and fourth, I'd definitely say that the variable on the y-axis had a relationship with the one on the x-axis and I'd call all of them associated. (I might use "related" for the 5th and 6th but I'd tend to want to clarify that they weren't functionally related.)

Not the answer you're looking for? Browse other questions tagged correlation terminology association-measure or ask your own question.