It seems to work rather well, but I'm not sure about the convergence/stopping criteria. Looking at the method's algorithm, it's easy to see that it can get stuck trying to find models below the given threshold ($\epsilon_t$): 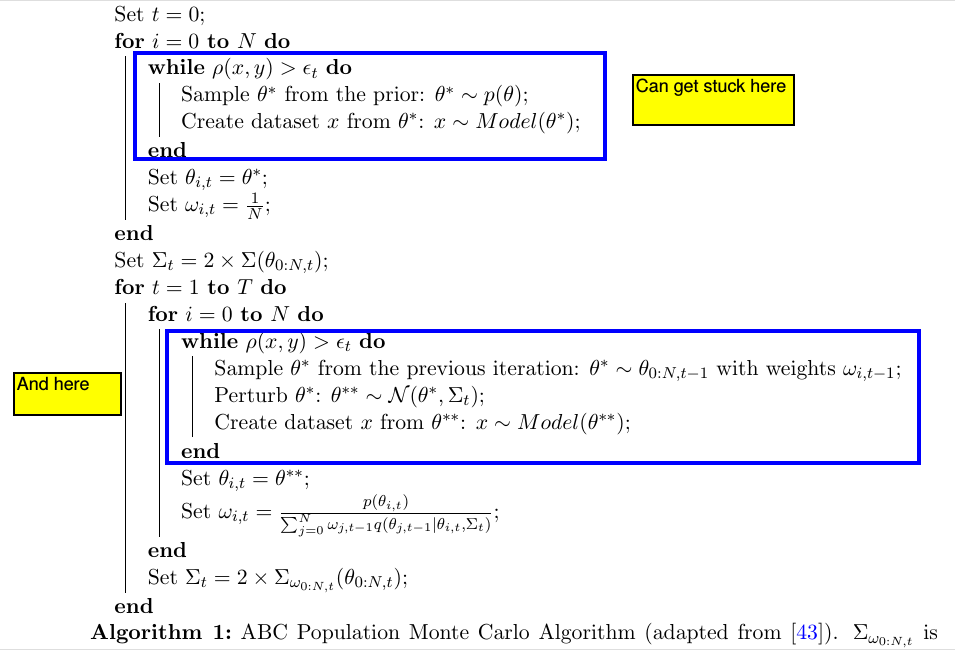 where $N$ is the number of "particles" used. What I currently do is to stop the process if at any step it spends more than a fixed amount of time finding those $N$ particles below the current threshold value (say 30 sec per particle as the maximum allowed time for some 20 particles, ie: 10 min of max time at any step).

A first remark is that ABC only gets stuck when using predetermined tolerance levels. However there is rarely an instance where these levels have an absolute meaning, except for the limiting value $\epsilon_t=0$. They should thus be derived or calibrated from the prior predictive simulation itself.

A basic ABC method rejects a parameter value after one single failure to be near the observations, hence rejecting instead after N repeated failures or s seconds is equally fine.

In their sequential ABC approach, Del Moral and Doucet (2011) stop decreasing $\epsilon_t$ when they cannot go deeper, i.e. when the acceptance rate gets too small. (We also advocated this approach in our population ABC.) This suggestion is similar.

ABC samples are actually independent (and even iid) for the basic accept-reject schemes and some SMC implementations like ABC-PMC if not for ABC-MCMC versions. In the case of such importance sampling schemes, the importance weights can be turned into an effective sample size, as in usual importance sampling settings.

Not the answer you're looking for? Browse other questions tagged bayesian mcmc convergence abc optimal-stopping or ask your own question.