I am running an ADF test in R on the following series: 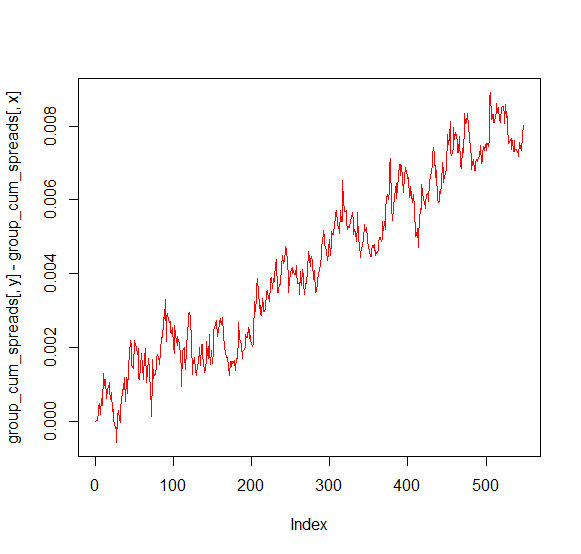 This to me is clearly non-stationary, but when I run the ADF test:

For whatever lag value I use I get a low p-value indicating a stationary series:

I just can't understand why this is stationary or why the test indicates that it is. I have several examples like this in my data set too.

The general regression equation which incorporates a constant and a linear trend >is used and the t-statistic for a first order autoregressive coefficient equals >one is computed. The number of lags used in the regression is k. The default >value of trunc((length(x)-1)^(1/3)) corresponds to the suggested upper bound on >the rate at which the number of lags, k, should be made to grow with the sample >size for the general ARMA(p,q) setup. Note that for k equals zero the standard >Dickey-Fuller test is computed. The p-values are interpolated from Table 4.2, p. >103 of Banerjee et al. (1993). If the computed statistic is outside the table of >critical values, then a warning message is generated.

Missing values are not allowed

There are some exceptions, e.g. missing values.

What is the difference between a stationary test and a unit root test?

I already explained situations, in which the Nullhypothesis of an ADF-test is rejected and a time series is not-stationary. You should apply a KPSS test for stationarity as well.

Reject unit root, reject stationarity: both hypothesis are component hypothesis >– heteroskedasticity in series may make a big difference; if there is structural >break it will affect inference.

Not the answer you're looking for? Browse other questions tagged r time-series stationarity unit-root augmented-dickey-fuller or ask your own question.