I have river flow rates for two separate rivers

The data produced this scatter graph for both rivers 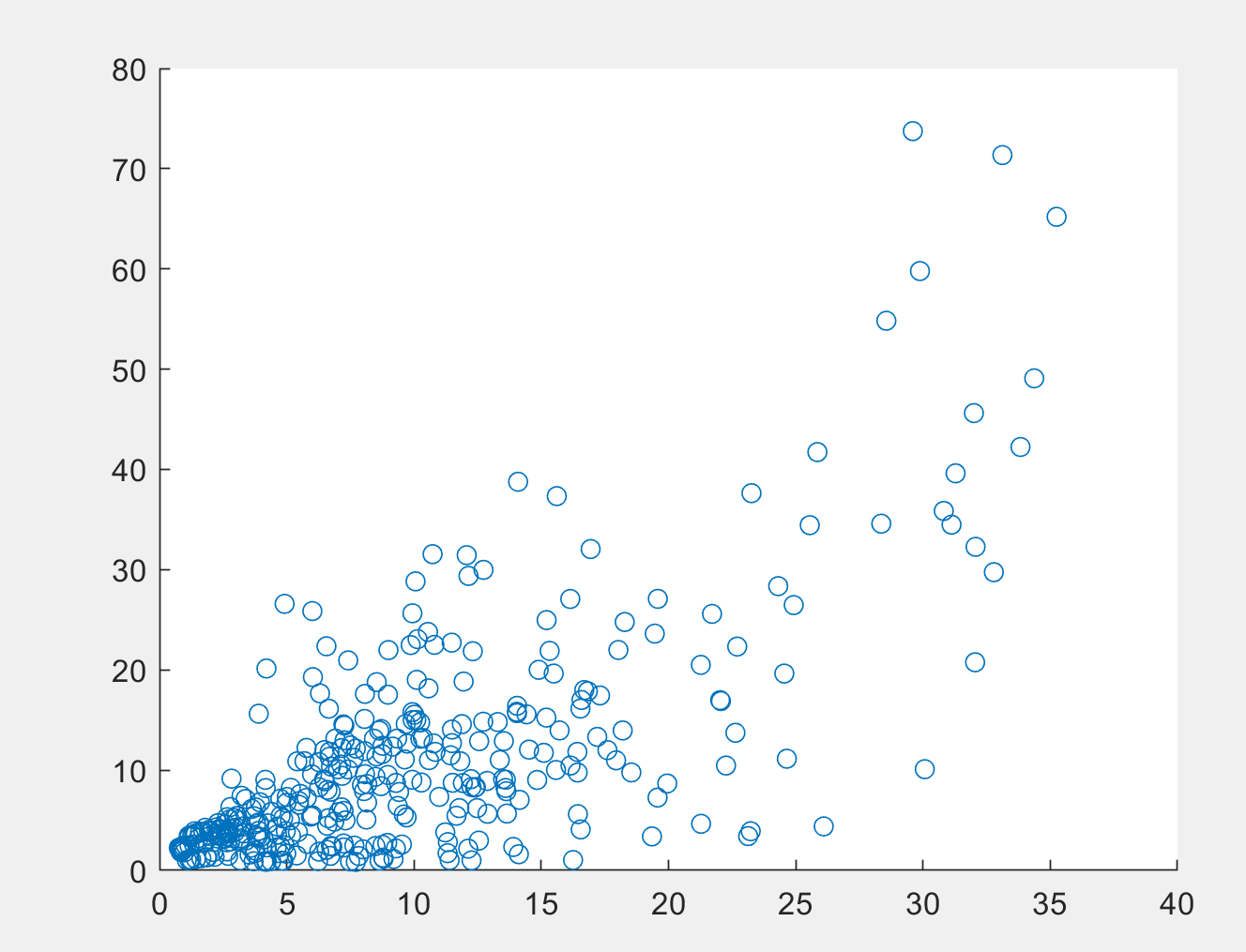 What is the best type of correlation to use here?

For this particular problem, Spearman rho, apart from noise, will be larger than Pearson correlation until the logarithm of both the $x$ and $y$ values are taken. Since logarithms do not change ranking order, taking logarithms will not change the Spearman rho correlation (stet; zero change), but the Pearson correlation will improve markedly. Here is an example of improved Pearson correlation from log-log transformation of fan-type data from Wesolowski CA, Babyn PS, Puetter RC. An improved method for determining renal sufficiency using volume of distribution and weight from bolus Tc-99m-DTPA, two blood sample, paediatric data. Nucl Med Commun. 2006;27:963-70. doi:10.1097/01.mnm.0000237988.52572.2c. 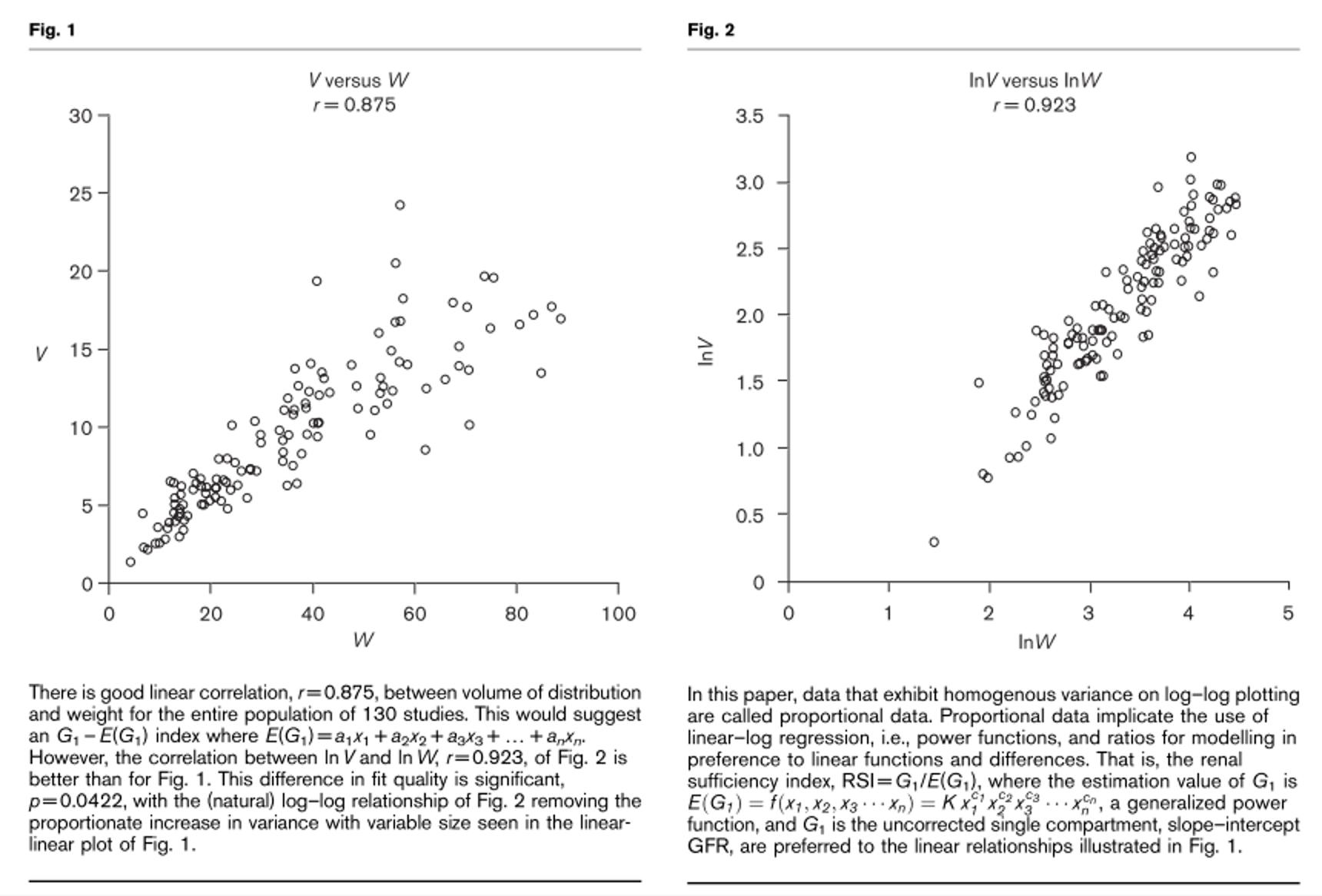 That is, the Pearson correlation is higher for the linear case with homoscedastic residuals, and the Spearman rho correlation, in effect, converts the problem into the equivalent of a linear homoscedastic one.

There are, however, other considerations. The example given in this answer is probably somewhat more deterministic than the river flow question, that is, it shows in semi-closed systems (pair-wise human bodies), how pair-wise volumes of distribution of a drug and subject masses covary. There are, however uncontrolled variables, e.g., subject to subject variable metabolic-scaled clearance of the drug, varying patient fluid disturbance pathophysiology, modeling error, etc. The river example in the question is clearly moderated by external variables in a mostly open system; two rivers in separate geographic locations with different topography, rainfall and rainfall collection systems (e.g., ponds), cloud cover and possibly different snow melt, i.e., temperature and or climate considerations. Thus, the correlation obtained in the river correlation case is more clearly driven by unspecified causal, or linking variables such that the meaning of the correlation is at best indirect without also examining those factors.

This difference between the two problems can be stated more crisply as follows. In the first case, it is reasonable to postulate that increased body mass is roughly proportional (causally) to the fluid volume of distribution of drug. In the second case, the flow in one river does not cause the flow in the second river, that is, if the rivers are physically different (thus independent) the flow in them can only covary roughly proportionately if similar filling and emptying of those systems occurs simultaneously. The simultaneity requirement is also not an especially useful requirement, as a lag time, seasonal time series analysis and other processing may be more useful.

Note to OP: Although not strictly necessary, it would be nice to label the rivers 'A' and 'B' and put the units of flow in, e.g., cubic feet per minute or cubic meters per second, because one user requested this and because larger rivers may have more similar flows than smaller ones in similar geographic locations.

Not the answer you're looking for? Browse other questions tagged spearman-rho scatterplot kendall-tau correlation or ask your own question.