Not necessarily. It is instructive to understand why not.

The issue is whether some linear combination of the variables is linearly correlated with the response. Sometimes a set of explanatory variables can be extremely closely correlated, but removing any single one of those variables significantly reduces the quality of the model.

This can be illustrated through a simulation. The R code below does the following:

$Z$ plays the role of a "nuisance:" it represents a great deal of variability common to all regressors but unrelated to the response.

Let's study this situation. Here is a scatterplot showing an example of the data the simulation produces (for a sample size of $24$) when $\rho=0.1$ and $\sigma=0.01.$ 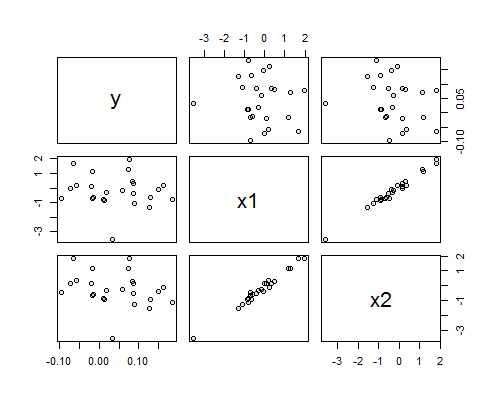 The strong positive correlation of the $X_i$ is apparent, even in this small sample, through the clustering of data along the diagonals of the $X_1-X_2$ scatterplots. $Y$ doesn't appear to have much of a linear relationship to the $X_i,$ as the random scatter in the top and left plots and the results of the two ordinary regressions show.

The ordinary regression results are similar, so I will display only the first one.

Compare this to the multiple regression using both variables:

These are all dramatic differences, showing why even when regressors are correlated, it might be useful to include them all.

It can be instructive to play with this simulation by modifying its parameters $n,$ $\rho,$ and $\sigma.$ (Remove the set.seed line in order to get varying results.)

Not the answer you're looking for? Browse other questions tagged regression machine-learning multiple-regression or ask your own question.

2
How does whitening or decorrelation help machine learning models?