So if I create a model with just HS_ENGL as the predictor, it comes up as significant. As I add additional variables, its coefficient drops + it becomes less significant.

I think if the 3 independent variables had been perfectly orthogonal, then HS_ENGL would have remained the same through the models. So the first thing I did was compute the VIF and got the following. All low values.

Next I plotted the correlation between them as below; focus on bottom 3 variables. Hence despite the fact that the VIF were low, the variables are correlated as shown below.

Is this the reason for change in the coefficient of HS_ENGL? Also could there be other possible reasons like 'interaction terms'?...I have not learned about these in any detail yet. 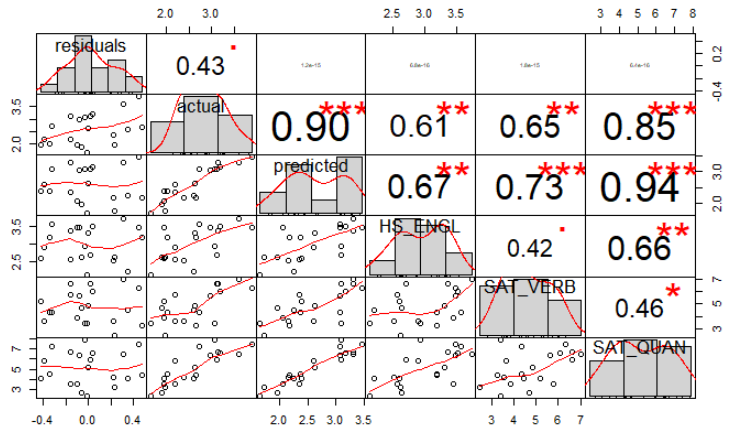 Browse other questions tagged r regression linear or ask your own question.

3
Nonsignificant interaction still causes main effect to flip?
3
GAM Interactions : Individual and Combined Interactions are different
3
Why do my (coefficients, standard errors & CIs, p-values & significance) change when I add a term to my regression model?