I have a question regarding the meaning of an interaction term in a linear mixed effects model. Considering the following experiment (similar to a real one I have): there are three sites, each with two treatments in them. Some variable is measured over four seasons for the site-treatment combinations, and let's say there are 6 replicates for each combinations (i.e. n=144=3 sites x 4 seasons x 2 treatments x 6 reps).

So I made a fake dataset where I deliberately make seasonal variation not have an effect (data are all normal and with SD=1). However, the values are different for each site, BUT treatment 2 is consistently larger than treatment 1 at each site (excuse the strange way of making the data, but hey it illustrates my problem).

SO: The main effect for treatment is significant (no problem there), main effect for season non-significant (deliberate)..... but now: why is the site X treatment effect significant? My understanding was that having site as a random effect controls for added variation in sites, such that if a treatment effect is consistent across sites, even though the absolute values are different, then there should not be a site x treatment interaction. In my mind, the presence of such a significant interaction would mean that although treatment has an effect, it is not consistent and that the effect is site specific, as in if for some sites the blue and red dots would swop around.

Could someone please clarify where my misunderstanding is of this?

EDIT: Sorry, what I also wanted to add is that in my real experiment, we know that there are inherent site differences, which is exactly why we want to control for site effects... 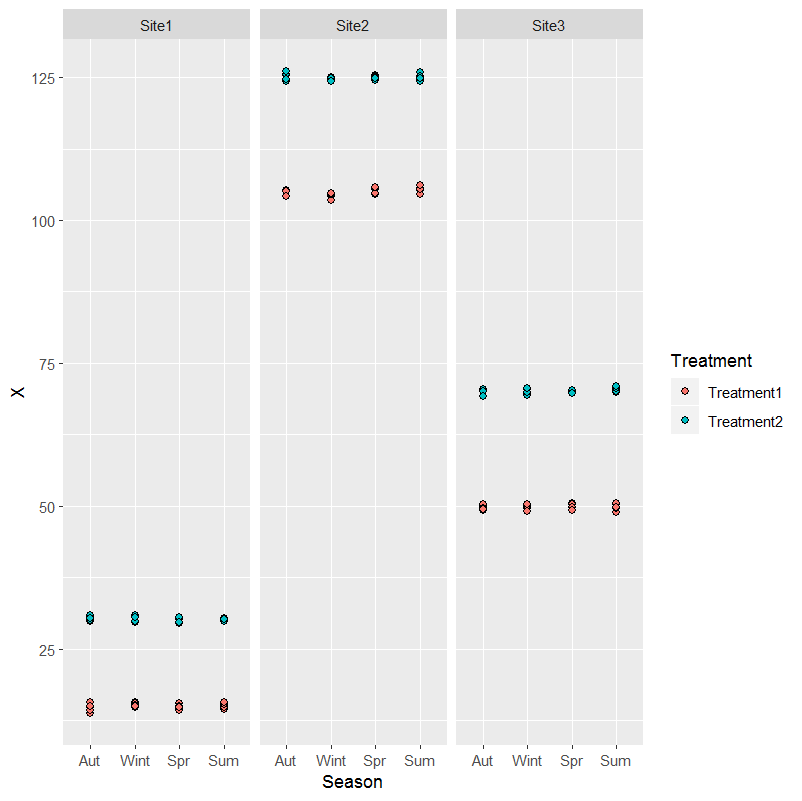 I think the way you formulated the model is a bit misleading: you have Site as grouping factor (i.e., there are random intercepts contingent on which site you are measuring), but then you add it also as a fixed-effect predictor, in interaction with Treatment. I don't think that the interaction term makes much sense: if there are site-specific variation in the effect of treatment, and you want to control for those random variations (site effects), then I think the model should have the following form:

This model have random intercepts (site-specific variation in intercept) and random slopes for Treatment (site-specific variation in treatment effects). Crucially, these random effects are assumed to be Gaussian distributed with mean zero. So the fixed-effect estimate of Treatment represents the estimated mean effect for your "population" of sites. The model also estimates the variance of such effect across sites:

Not the answer you're looking for? Browse other questions tagged r mixed-model lme4-nlme interaction or ask your own question.

12
How to perform post-hoc comparison on interaction term with mixed-effects model?
6
How would you model this random effects structure?
1
Kruskall-Wallis test. How many degrees of freedom to report?
6
Interaction term in a linear mixed effect model in R
4
repeated-measures linear mixed-effect model
28
"Model failed to converge" warning in lmer()
0
Mixed effects model with random and nested effects in lmer