back propagation in neurons with zero weight and some specific conditions

I have read a lot of articles to understand what is happening behind the scene in backpropagation like Ive gone through this and many other like that.

I think I understand how the backpropagation works, but not clear on some exceptions!.

now I want to explain the exception :)

my question is based on the proposed method in this paperhere which is a very interesting paper.

proposed method: big picture: they want to change the autoencoder in a way it gives a better representation of the data in the middle layer.

their idea is : KATE uses tanh activation function for the k-competitive hidden layer.

We divide these neurons into positive and negative neurons based on their activations. The most competitive k neurons are those that have the largest absolute activation values. However, we select the ⌈k/2⌉ largest positive activations as the positive winners, and reallocate the energy of the remaining positive loser neurons among the winners using an α amplification connection, where α is a hyperparameter. Finally, we set the activations of all losers to zero.

Similarly, the ⌊k/2⌋ lowest negative activations are the negative winners, and they incorporate the amplified energy from the negative loser neurons. We argue that the α amplification connections are a critical component in the kcompetitive layer. When α = 0, no gradients will flow through loser neurons, resulting in a regular k-sparse autoencoder (regardless of the activation functions and k-selection scheme). When α > 2/k, we actually boost the gradient signal flowing through the loser neurons. We empirically show that amplification helps improve the autoencoder model. 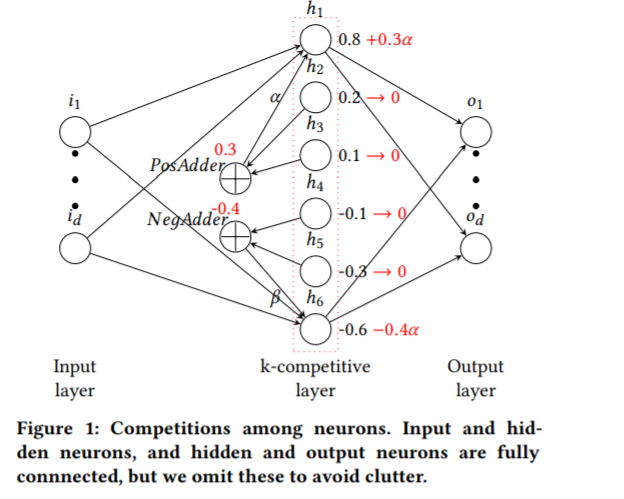 according to the bold part, how the neural net can firstly goes throgh the loser neuron then the winner!!! and also the loser neuron being set to zero how they can get some update regarding alpha??

Am I missing some part and not understanding backpropagation correctly?

Please let me know if the explanations are not clear. the link I shared is for the paper you just need to have a quick look on the section3

You have to look at this layer as a 3 steps operation.

No gradient go through $\tilde{h_1}$ because it is set to $0$ as you said. However there will be gradient through $h_1$ via $\tilde{h_0}$ and $pos$. The gradient of the 'tilda' layer is first computed then backprpagated to $pos$ and $neg$ then backpropagated to the initial hidden layer $h_0 ... h_5$.

Not the answer you're looking for? Browse other questions tagged neural-networks loss-functions backpropagation autoencoders weights or ask your own question.